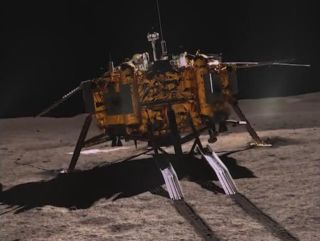 The lunar home of China's Chang'e-4 lander, which landed on the far side of the moon Jan. 3, now has a name: Statio Tianhe.

Statio means a post or station in Latin and is also used in the formal name for the Apollo 11 landing site, Statio Tranquillitatis; Tianhe is an ancient Chinese name for the Milky Way sky river that is used in a folk tale called "The Cowherd and the Weaver Girl." The location is near the previously named Von Kármán Crater.

The International Astronomical Union, which oversees all formal names for features in space and on solar system bodies, unveiled the new landing mname for the Chang'e-4 mission today (Feb. 15), along with names for four other nearby sites explored by the lander and its Yutu 2 rover. One is a mountain now called Mons Tai, after a mountain in China's Shandong province just south of Beijing. [Chang'e 4's Photos from the Moon's Far Side!]

The other three newly named far-side features are all craters, now known as Zhinyu, Hegu and Tianjin, all of which honor Chinese constellations. The first two relate back to the same tale from which Tianhe comes: Zhinyu is the name of a fairy in the story, and Hegu includes the star Altair, which in China carries the name of the tale's cowherd.

Chang'e-4 and its rover, Yutu-2, have both gone dormant for their second frigid, two-week-long lunar night. When the sun rises again over their neighborhood, they should power back up and resume their scientific explorations of the far side of the moon.