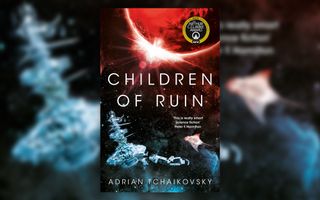 In prolific fantasy and science fiction author Adrian Tchaikovsky's "Children of Time" (Tor, 2015), the distant descendants of humanity confront a familiar but deeply alien presence on a terraformed planet. In the sequel, "Children of Ruin" (Orbit, 2019), out May 14, a team investigates a planet even more alien — and intelligences even stranger — even farther from home.

Both novels are fascinating, as they put the narrative focus on nonhuman intelligences while depicting the ecosystems and technologies that have sprouted from those strange perspectives. Space.com talked to Tchaikovsky about the new novel, writing alien minds and alien technology, and his take on how to prepare for meeting extraterrestrials.

Related: How Would We Talk to Aliens?

Space.com: Did you expect to write a sequel to "Children of Time"?

Adrian Tchaikovsky: It was very much a stand-alone book when it first came out, but one of the things I've kind of learned to do is you never write anything you can't do a sequel to, should the opportunity arise. And anyone who's read the first book will know in the very final chapter, there's a definite hook that might lead somewhere. And so, obviously, the book then did fairly well, and at the same time, I started to get ideas for what a potential sequel could be. Those two things came together, and I've always — a good couple of years after the book had come out, I had enough material, enough good ideas, to try to do a sequel worthy of the original.

Space.com: Going into the book, what ideas were you most excited to explore?

Tchaikovsky: For me, [book development happened] in the same way that the nonhuman civilization that's a major feature of the first book was very much the thing that came first, and the book then coalesced around that. The other — the scientific experiments, which also sort of turn into narrative experiments in the book, were very much what I was excited to do, and to expand the sorts of viewpoints I was writing from. Although a lot of people seem to be very happy with the Portiian [spider] viewpoints from "Children of Time," I really had to stretch my brain to get my head around the other nonhuman perspectives. I'd kind of say I've gone a bit above and beyond in terms of finding unusual nonhuman protagonists.

Space.com: And at least one of the species in this book is inspired by another Earth species.

Tchaikovsky: A lot of people will know, obviously, "Children of Time" involved spiders. And in the same way, there's an octopus species that has a rather different path set out for it in "Children of Ruin" that goes very differently and is considerably less human than the Portiid spiders from the first book.

Space.com: Both of these books show the weird technology that would grow out of a nonhuman consciousness. Can you talk about that?

Tchaikovsky: You see much more of the development of the spider tech in "Children of Time," because it's done entirely independently of any kind of human technology. Because they're living in the same kind of universe, they're running into the same kind of problems that we do and that our ancestors have, but they think differently, and so their solutions to those problems are very different. They actually get into space without ever really inventing fire or the wheel, which I was particularly proud of. There are certain ideas that are very, very intuitive to them that are not to humans, and vice versa.

With the octopi, it's a bit different. I won't go into huge amounts of detail, but they have a rather different starting point to the spiders. A lot of the things that they have to work with in technologies are simply because they are aquatic creatures. And being an aquatic, spacefaring creature has a lot of serious physics ramifications and issues you have to get over. To which end, I think I had, at one point, about nine physicists advising me on precisely how various parts of the book and the spaceflight … would actually work.

Space.com: Did any really interesting or surprising ideas come up talking with scientists?

Tchaikovsky: Yeah, especially on the evolution front. I actually ended up working with the Natural History Museum in London on the spider evolution, the relevant department there. And just going down and chatting with them about the logistical problems of large arthropods. The sort of things they'd bring up just in passing about other things they've done actually ended up giving me huge slices of extra plot I could throw in and solutions to other problems I didn't even realize I necessarily had. And similarly, with the octopi — because, unfortunately, I didn't know anyone whose time I could impose on in the same way, but I did find an enormously useful book called "Other Minds" [by Peter Godfrey-Smith (Farrar, Strouss and Giroux, 2016)], which was talking about octopus cognition. And that was enormously useful in just giving me the grounding of how do they think. They're enormously intelligent animals, without [outside intervention] uplifting them in any way. What are their perspectives, and what would their viewpoint on the world be?

I was enormously proud — one of the spider researchers whose work on jumping spiders inspired "Children of Time" connected with me on Twitter recently and was tacitly approving of what I'd done with her research. I would be tentatively interested in hearing from an octopus researcher to see how close to the mark they feel I've got.

Related: Spider May Have Survived Months in Space

Space.com: It was really interesting to see how you described that cognition from the inside, because it was so much more of a leap than the spiders in the previous book. Was it challenging to make that understandable?

Tchaikovsky: I think it's possibly the hardest thing that I've ever done as a writer. There's always this kind of, almost a gravitational pull towards anthropomorphizing things and making them more human, because that's innately more comprehensible and it's easier to write. And it's walking that line, where you're writing something that is comprehensible to your readers but at the same time isn't simply slapping a mask on a human viewpoint. Hopefully, I've managed. Of course, it's very hard to tell, because you know what you want to say, but it's not necessarily clear whether that's coming over.

Space.com: Did you have any science fiction inspirations for that?

Tchaikovsky: One of the big inspirations, one of the things that gave me the courage to write it was a book ["What Does A Martian Look Like" (Wiley, 2002)]. It's not strictly science fiction — it's speculative evolution, by Ian Stewart and Jack Cohen. ... They're the same guys who did the science of the Discworld books. They've been scientific advisors on a number of sci-fi books going all the way back to Anne McCaffrey. And they wrote a book basically talking about what sort of assumptions you should and shouldn't make when designing and developing an alien. Even though with the octopi we're not dealing with things that are strictly alien because they're Earth-derived, it was an enormously useful book of thought experiments. That really, really helped me.

Space.com: Both of these books take place in the far future, after humanity's mostly destroyed. What do you like about that setting?

Tchaikovsky: It allowed me to have my cake and eat it with the human part of the narrative. Obviously, there's a big danger when you're writing about the future that it can look suspiciously like the present. There's a lot of sci-fi stories — there's a lot of 1950s-style stories especially — where the protagonist gets back from a hard day's work at the time machine factory and his wife has got his dinner on the table, and he lives in a 1950s house in the suburbs. And the fact that there's been this enormous invention has changed literally nothing.

When you think even, just, say, 40 years ago, there's so much going on now that our parents would not have been able to imagine. But because I had a situation where I just crashed human society into the stone age, then had it work its way back with the assistance of finding records and relics of the previous human culture, it meant I could have a far-future setting which was simultaneously not a million miles removed from our own. In fact, the fact that it is almost slavishly following the pattern set down by the previous failed cycle of human society is a major feature in parts of the book. It gave me carte blanche to pick and choose what parts of current humanity I had [in the book's human population] without it feeling false to have them set far into the future.

Space.com: Do you think humans can prepare to meet aliens by considering the alien minds here on Earth?

Tchaikovsky: I'd like to say yes, but the problem is, of course ... There are two competing schools of thought on this, one of which is, compared to anything on Earth, be it a shark or a spider or anything like that, aliens would be much more alien than that. And given how bad we are, frankly, at dealing with animal intelligence, up to and including periods of basically denying that animal intelligence is even a thing, that doesn't bode terribly well. It's entirely possible that we'd run into alien intelligence and fail to recognize it as intelligence or possibly even as life.

The other [school of thought], which I also kind of play with in the books, is the idea that because we are living in the same universe, and because physics is a constant and potentially mathematics is a constant — although I'm aware that's not an entirely undisputed bit of philosophical point — but even a very, very alien alien could come to the point where it's going to share context with us, purely because it's in a position to study the universe and it's the same universe. And, obviously, we've never met any aliens and the only life we know is on Earth, so we have a sample set of one. It's very hard to know how things might go. But certainly, the more we could expand our point of view, given that one of the major problems we have within humanity is individual sections of humanity being unable to empathize or deal with other sections of humanity, let alone things not human at all. The more we can expand our point of view, one feels, the better.

Space.com: Do you have any plans for future entries in this series?

Tchaikovsky: Yeah, there is a potential third book that is — I've been working with this series in particular. I have blocks of ideas, and they all slowly coalesce until I feel I have enough to make a whole book out of. And so I feel I've got, say, about two-thirds of a potential third book just slowly boiling away on the back burner. You never know.

This interview was edited for length. You can buy "Children of Ruin" on Amazon.com.