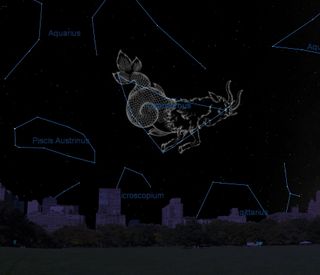 This sky map shows the location of the constellation Capricornus in the October evening sky as viewed from mid-northern latitudes.
(Image: © Starry Night)

It has always seemed to me that the ancient skywatchers had an incredible imagination. Once the sun went down and the sky became dark, they looked to the stars to provide a source of entertainment, tracing out a variety of patterns representing everything from notable human figures to a variety of beasts.

Some of these animals could be found on Earth: a lion, a swan, an eagle, dogs. But sometimes their imagination worked overtime, and we ended up with a number of celestial creatures that never existed. For example, there are two centaurs, a fire-breathing dragon, a unicorn and a flying horse just to name a few.

But perhaps the most grotesque is Capricornus. In the old star atlases, Capricornus is depicted by the figure of a "sea-goat," combining the forequarters and head of a goat and the tail of a fish.

The constellation Capricornus has been named for a goat since the time of the Chaldeans and Babylonians. But half goat and half fish?

This kind of creature might seem unintelligible to us today if we did not know the ancient myth that explains its origin. Actually, the lore behind Capricornus is rather amusing. According to folklore, there were some sea nymphs and goddesses playing in a field one day when the mischievous god, Pan, saw them and joined in the fun. But then, a huge, ferocious monster called Typhon suddenly appeared. To escape him, each god changed himself into an animal and fled. However, in Pan's alarm (hence the word "panic") he jumped into the nearby Nile River before completing his transformation into a goat. As a result, his lower extremities assumed the form of a fish! Zeus saw Pan's feat and was so amused that he decreed the perpetuation of this bizarre figure in our night sky.

This week, at around 9:30 p.m. local daylight time, the sea-goat appears due south, when the Summer Triangle shines high overhead in the evening skies of early fall. It's a moderately dim pattern, whose stars form a roughly triangular figure that might suggest an inverted cocked hat, an arrowhead, a boat or perhaps a stingray flying directly toward you.

Interestingly, in his famous two constellation guides, "Find the Constellations" and "The Stars: A New Way to See Them" (both published by Houghton Mifflin Co., Boston), author H.A. Rey turns Capricornus into a fairly convincing-looking goat. Unfortunately, this directly contradicts the ancient depiction of the sea-goat. The star at the tip of Rey's goat horn is Deneb Algiedi, which means "the tail of the goat." The name "Deneb" is derived from the Arabic word for "tail." There's also a star named Deneb in the tail of Cygnus, the swan, and another one named Denebola, in the tail of Leo, the lion.

On the opposite end of Capricornus is the star Algiedi, which means "the goat." This is a good test for skygazers with unusually keen eyesight. Many observers, without an optical aid, can see that it is two stars separated by 6 arcminutes (the moon in comparison measures about 30 arcminutes across, on average). So, here is a naked-eye test for a night sky's clarity and steadiness. The pair is a double star by sheer coincidence; neither are neighbors to each other, but from our vantage point on Earth they appear closely aligned. Binoculars reveal both stars clearly. And each star is a true binary star system.

Also within the boundaries of Capricornus is the globular star cluster Messier 30 (M30). Perhaps 27,000 light-years away, it appears merely as a very faint glow to the naked eye on a clear, dark night and a pale, white nebulous spot through binoculars. It has a fairly dense center and is not well resolved in small telescopes; it requires at least a 6-inch telescope to resolve it into individual stars.

Around 1500 B.C., the sun reached its southernmost position in the sky (what we refer to as the December or winter solstice) when it was passing through Capricornus. During this time the sun passed directly overhead as seen from latitude 23.5 degrees south, the southerly latitude we call the Tropic of Capricorn.  It still carries this name, although the sun, as a result of the wobbling motion of the Earth's axis known as precession, is now passing through the zodiacal constellation of Sagittarius at the time of the winter solstice.

One of the oldest references to a particular constellation, which so happened to be Capricornus, is supposed to have come from the records of Sargon, founder of the first Semitic empire of Babylon about 2800 B.C., and it foretold the destruction of our world by fire whenever the five naked-eye planets (Mercury, Venus, Mars, Jupiter and Saturn) should gather in the sign of Capricornus. Supposedly in 2449 B.C., just such a conjunction of all five planets in Capricornus was observed according to the Chinese Chronicles, but it took place without any dire consequences.

Several years ago, out of curiosity, I used a computer program that depicts what the sky looked like for thousands of years in the past or future, in order to check if the planets indeed gathered in Capricornus in 2449 B.C. But from what I could see, no such planetary gathering took place. So, this story was nothing but a fallacy, and this exceedingly rare "celestial summit meeting" never took place.

So much for the "end of days."

Finally,, it should also be emphasized to newcomers of astronomy that the currently accepted name of this constellation is Capricornus, and not Capricorn. Principally astrologers (and some older astronomy books) use the latter for labeling the zodiacal sign of that name. For example, in his 1990 book, "Fixed Stars and Judicial Astrology," (American Federation of Astrologers) author George C. Noonan writes: "The constellation Capricorn has a great influence over human affairs portending major changes in such areas as climate and political customs. Along with the sign, the constellation is also noted as the 'Mansion of Kings.' Unfavorably situated with regards to lunar eclipses, it indicates major storms, especially at sea."

Oh well ... whatever floats your goat!