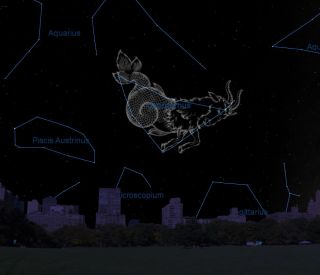 This sky map shows the location of the constellation Capricornus in the October evening sky as viewed from mid-northern latitudes.
(Image: © Starry Night Software)

Located in the Southern Hemisphere, Capricornus represents a creature that is a blend of fish and goat; the name means "goat horn" in Latin. While it is one of the Zodiac constellations identified by the Greek astronomer Ptolemy in the 2nd century, Capricornus is often used when referring to the constellation, while Capricorn is used in conjunction with the sign of the Zodiac.Locating Capricornus

To find the arrowhead-shaped Capricornus in the sky, look for the Summer Triangle and make a line from Vega through Altair to the lower southern sky.

The tropic of Capricorn — the place where the sun appears overhead at noon on the winter solstice — originally sliced right through its namesake constellation, but the line has since shifted to go through the constellation Sagittarius.

Three bright stars — Alpha-2 Capricorni, Beta Capricorni and Omega Capricorni — form a triangle that makes it easier to pick out the constellation.

The goat's tail is formed by Delta Capricorni, the brightest star in the constellation at magnitude 2.85. Also known as Deneb Algedi — deneb is Arabic for tail — it is a four-star system with an eclipse that can be seen with the naked eye. "The star is a fascinating, confusing wonder, and astronomers seem unsure of just how to classify it," said retired astronomer Jim Kaler on his website. "Its greatest claim to distinction is that it is among the brightest of the "metallic A stars," those hotter stars that seem to be highly enriched in most metals yet have deficiencies in others like calcium."

The second brightest star — Beta Capricorni, also known as Dabih — is a multiple-star system. The two main parts to the system are Beta-1 Capricorni (or Dabih Major) and Beta-2 Capricorni (or Dabih Minor). Dabih Major contains an orange bright giant and a blue-white dwarf and Dabih Minor is a binary star with an A0-giant as the primary. The two pairs are at least 21,000 times as far apart as the Earth and the sun. "The star is a bit of a mess, or at least such is our knowledge of it," Kaler said.

Sometimes identified as the belly of the goat, Omega Capricorni is a red giant star with a highly variable luminosity and magnitude. Its class remains uncertain, given both a K and an M giant designation. The star itself has not received much attention, and its temperature and variability remain unmeasured. "The star, like its constellation, remains obscure," Kaler said.

The star cluster Messier 30 is in the southern part of the constellation, near the barium star zZeta Capricorni. M30 was part original discoveries of Charles Messier, an18th-century French astronomer.

The constellation has its roots in the cultures of Sumeria — which identified it with a mythical figure that was half goat and half fish — and Babylonia, which portrayed it as a goat-human hybrid.

The Greeks associate the constellation with Pan, the god of nature. Part of Pan's lore was that he helped Zeus fight the Titans to earn his spot in the heavens. He escaped the monster Typhon by jumping into the Nile, but only half of his body was submerged, so he was a fish in the part of his body that remained underwater. Other spins on the tale have the constellation associated with Amalthaea, the mythical goat that acted as a foster mother to Zeus as an infant.

In astrology, which is not a science, Capricorn is the 10th sign in the Zodiac and represents those born between Dec. 22 and Jan. 19.