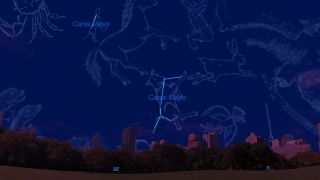 Canis Major and Canis Minor are visible in the south-southwest after sunset.
(Image: © Starry Night Software)

This is the month when the constellation of Orion, the mighty hunter, and his retinue dominate the southern sky at around 8 p.m. local time. Orion, of course, is the brightest of all the constellations, with a rectangular array of four bright stars outlining his torso and three bright stars positioned diagonally to mark his belt. Surrounding Orion are several star patterns, not quite so bright, but each one containing at least one object that attracts attention.

Although Orion is the brightest constellation, it does not contain the brightest star in the night sky. To find that star, take Orion's belt and stretch an imaginary line through it, down and to the left. Eventually, you will come to a dazzling, blue-white jewel: Sirius, the Dog Star, and the brightest star of the constellation Canis Major, the larger of the two hunting dogs that belong to Orion.

According to the ancient Greeks, Canis Major was an incredibly fast runner. Known as "Laelaps," the dog supposedly held a race against a fox who was deemed to be the fastest creature on Earth, with the dog winning handily. Zeus placed the canine among the stars to celebrate the animal's victory.

Without a doubt, throughout the course of human history, Sirius has been the most brilliant of all the so-called "fixed" stars in the night sky. In his classic book "Star Names: Their Lore and Meaning" (Dover Reprint, 1963), author Richard Hinckley Allen devotes no fewer than 10 pages to the various mythological references and titles of this one star alone.

Sirius was said to be responsible for the Northern Hemisphere's hot, muggy "dog days" that run from early July through mid-August. Legend had it that because Sirius rises at about the same time as the sun during the period from July 3 to Aug. 11, the star's brightness added to the sun's energy, producing additional warmth. Indeed, the scorching heat was said to bring forth fever in humans and madness in dogs.

Star of the Nile

The ancient Egyptians had a great deal of respect for Sirius. After being rendered invisible due to its proximity to the sun for a few months each year, the star would rise out of the dawn twilight, an event known as the star's "heliacal rising."

Year after year, this would herald the annual flooding of the Nile Valley, so, quite naturally, the Egyptians concluded that this star brought about the life-giving flood of their river. People then opened the gates of canals, allowing the waters to refertilize their fields with silt.

Around 3000 B.C., the heliacal rising occurred each year roughly on June 25, and it is referred to in many temple inscriptions where the star was called Sothis, meaning "mistress of the year." In fact, these temples were often oriented to the exact spot where the star would rise, working on the assumption that as it rose earlier and earlier on each successive morning, it was calling up the waters by its own power and letting them loose across the plain.

The chief reason for the great brilliance of Sirius is its relative closeness to us. At only 8.6 light-years from Earth, Sirius is the fifth nearest star, and among those visible to the unaided eye, it is the nearest of all, save for Alpha Centauri.

In fact, based on calculations derived from the European Space Agency's Hipparcos satellite (launched in 1989), Sirius is on a course taking it closer to our solar system over the next 60,000 years. So, this star will appear to become a bit brighter over the next 60 millennia, before receding and slowly getting fainter. And yet, it will still hold on to the title of "most brilliant" among the naked-eye stars for at least another 210,000 years.

Shining at magnitude -1.44, Sirius appears nearly twice as bright as its closest competitor, Canopus, which itself appears almost due south of Sirius and is visible in the southern United States.

As previously noted, Sirius' closeness is the chief reason it appears so bright. If we could move the star out to a distance of 10 parsecs — 32.6 light-years, or nearly four times Sirius' actual distance from us — the star would appear to shine only 7% as bright. Compared to our sun, it shines with about 25 times the luminosity, is nearly twice as wide as and is more than twice as massive.

Sirius is not a single star, but a double star, also known as a binary star system. Although it may look like one star to the naked eye, Sirius consists of two stars that are very close together, known as Sirius A and Sirius B.

Between 1834 and 1844, the noted German astronomer, mathematician and physicist Friedrich W. Bessel discovered that Sirius did not travel on a straight path through space, but rather it displayed wavy irregularities. Bessel concluded that an invisible companion revolved about Sirius, taking about 50 years to make one revolution.

In 1862, the famous telescope maker Alvan Clark, while testing a new 18.5-inch (47 centimeters) refractor at the Dearborn Observatory in Evanston, Illinois, aimed the instrument toward Sirius and discovered the faint star we now know as Sirius B, also known affectionately as "The Pup." Sirius B is a white dwarf star, containing about the same amount of mass as our sun, and yet it is roughly only one-hundredth the size of the sun.

This means that the gaseous material of The Pup is incredibly compressed. If it were possible to transport a teaspoon (5 milliliters) of this star's material to Earth, it would weigh several tons!

Below Sirius is a pattern of three stars, which form a distinct triangle and represent the hind quarters of Canis Major. But the star in the lower right corner of the triangle, which goes by the name Adhara, might better be called the Rodney Dangerfield of the night sky.

As many will recall, the late comedian's mantra was that he got no respect.

Well, that could certainly go for Adhara as well.

While most everyone gawks at Sirius, hardly anyone gives Adhara a second look. Yet, Adhara, which shines at a respectable magnitude of +1.50, also ranks overall as the 22nd brightest star in the sky. But because astronomers categorize such rankings of star brightness by a process known as "binning," Adhara is just barely too dim to be classified as a first-magnitude star. The cutoff for official first-magnitude classification is +1.49, so Adhara is recognized as just another second-magnitude star.

But if we could somehow place Sirius and Adhara side by side, it would be obvious which star is the true dazzler. Adhara is more than 1,500 times more luminous than Sirius! And yet, Adhara appears much dimmer to us, because it's 50 times farther away from Earth than Sirius is.

Even the renowned celestial cartographer Johann Bayer showed no respect for Adhara. When Bayer published his classic star atlas, "Uranometria," in 1603, he assigned lowercase Greek letters to the brightest stars in each constellation. As the second brightest star in Canis Major, Adhara should have been christened Beta. Instead, Bayer branded it Epsilon, usually reserved for the fifth brightest.

Rodney Dangerfield used to say, "The first time my old man played catch with me ... he dropped me." And it looks like, in setting its proper rank, Johann Bayer dropped Adhara as well!