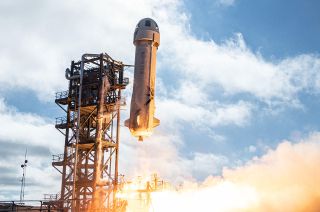 Liftoff of Blue Origin's New Shepard rocket on its twelfth suborbital mission to space and back from the company's West Texas launch site on Dec. 11, 2019. On board for this flight was the first batch of thousands of Club for the Future postcards.
(Image: © Blue Origin)

A commercial rocket's brief trip to space and back has given new meaning to the popular postcard slogan, "Wish you were here!"

Blue Origin, the private spaceflight company founded by Amazon CEO Jeff Bezos, launched a New Shepard rocket on a suborbital mission on Wednesday (Dec. 11), flying thousands of children's postcards, among other cargo, in place of the passengers planned for future flights. The rocket mail was part of an educational project organized by Blue Origin's nonprofit organization, Club for the Future.

"Today, we're sending our first batch of those postcards to space on New Shepard and then we'll mail them back to each student stamped 'flown in space.' How cool is that?" Dietrich said.

Wednesday's launch, which lifted off at 12:53 p.m. EST (1753 GMT) and landed 10 minutes later at Blue Origin's West Texas site, marked the sixth flight for this particular vehicle. It was the 12th mission for the New Shepard class of rockets, which was named after the first American astronaut to fly into space, Alan Shepard, who flew a suborbital Mercury mission on May 5, 1961.

In addition to the postcards, the New Shepard crew capsule, the "RSS H.G. Wells," also carried science experiments from NASA and Columbia University, as well as two "Art in Space" projects that were selected through a contest sponsored by the rock band OK Go.

"This will also be the ninth commercial payload mission for New Shepard, and we are proud to be flying [payloads from] our 100th customer on board," said Blue Origin.

The reusable rocket reached a maximum altitude of about 65 miles (105 kilometers), crossing the internationally recognized Kármán line that marks the beginning of space, at 62 miles (100 km).

The New Shepard flight was the first since May, when Blue Origin also announced the Club for the Future and the offer to fly children's postcards.

"One of the things we have to do is inspire the future generations," Bezos said in May. "I am announcing that Blue Origin is founding the Club for the Future, whose mission is to inspire young people to build the future of life in space."

Billed as a "new kind of space club," the Club for the Future is open to students in kindergarten through high school, their parents and educators who are interested in efforts to preserve Earth and want to "unlock the potential of living and working in space." The Club will organize initiatives and campaigns that make use of Blue Origin's access to space, the first being "Your First Space Mail."

In August, Bezos said the club had received thousands of postcards from 22 countries, "and more come in every day." Blue Origin previously said that it would fly the first 10,000 postcards received by July 20. The exact number of cards on Wednesday's launch was not released.

The space mail program continues, however; the Club for the Future sent an email to its members using Wednesday's launch to encourage students to "learn how to fill out postcards with your class or organization to fly to space on a future launch."

The "Postcard from Space" activity joins a long history of rocket-launched mail that dates back to 1931, when 102 letters traveled by a solid-fuel rocket three decades before the world's first satellite entered Earth orbit. Later, in 1969, Apollo 11 crew members Neil Armstrong, Buzz Aldrin and Michael Collins postmarked an envelope while on their way back from the moon.