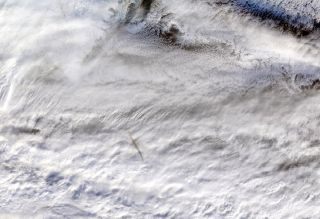 NASA's Terra satellite captured this image of the fireball that exploded over the Bering Sea on Dec. 18, 2018.
(Image: © NASA/GSFC)

Satellite photos give a striking look at the second most powerful meteor explosion of the 21st century.

On Dec. 18, 2018, an incoming space rock detonated 16 miles (26 kilometers) above the Bering Sea's icy waters, generating 173 kilotons of energy. That's about 10 times more than the amount unleashed by the atomic bomb the United States dropped on the Japanese city of Hiroshima during World War II, NASA officials said.

Only one impact event since 2000 was more powerful — the February 2013 airburst over the Russian city of Chelyabinsk, which produced a shockwave that injured more than 1,200 people. (Most of those folks were hurt by shards of flying glass from broken windows.)

Unlike the Chelyabinsk event, nobody on the ground saw or recorded the Bering Sea meteor, as far as we know. That's a consequence of the remote location; the Bering Sea lies between far eastern Russian and Alaska. But some sharp eyes in the sky did preserve the blast for posterity.

Meanwhile, a true-color MODIS photo shows both the fireball and its dark smoke trail, which stands out prominently against thick, white clouds, NASA officials said. (In case you were wondering, "fireball" describes any meteor that shines at least as brightly as Venus in our sky.)

Japan's Himawari satellite also observed the blast. You can see some of that spacecraft's photos in this Sky & Telescope story.

Scientists think the Chelyabinsk asteroid was about 65 feet (20 m) wide at the time of its dramatic encounter with Earth. That object's explosion unleashed a whopping 440 kilotons of energy.

But that output pales in comparison to a 1908 airburst over Siberia, which involved an asteroid thought to be about 130 feet (40 m) wide. This explosion, known as the Tunguska event, generated 185 times more energy than the Hiroshima bomb and flattened about 800 square miles (2,000 square kilometers) of forest. It's the most powerful impact event in recorded history.

And no, the gods don't have anything against Russia. Russia gets walloped by space rocks so much simply because it covers more area than any other nation.