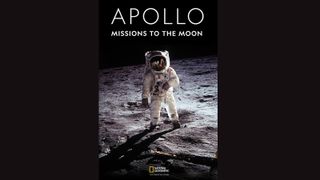 Poster for "Apollo: Missions to the Moon"
(Image: © National Geographic)

A 2-hour feature documentary on National Geographic will focus on the 50th anniversary of the first human moon landing, which the channel calls the "golden age of space."

"Apollo: Missions to the Moon" includes a narrative weaved from more than 1,300 hours of footage and audio and 10,000 photos. Much of this information is rare or newly transferred, National Geographic said. The documentary by Tom Jennings, an Emmy- and Peabody Award-winning filmmaker,  will premiere July 7 at 9 p.m. Eastern (8 p.m. Central) on the National Geographic Channel.

"The film includes several firsts, including the combination of NASA footage with 'black-box' recordings from Apollo capsules, and the synchronization of 30-track audio from mission control," National Geographic representatives said in a statement.

Audiences will see the Apollo program's history starting with the Apollo 1 fatal fire in 1967, the first crewed mission of Apollo 7, and then the practice missions (near the Earth and near the moon) leading up to the moon landing of Apollo 11. Then the documentary brings viewers through the last six moonbound missions (five landings and the fateful Apollo 13, which aborted and returned to Earth) before Apollo 17 lifted off for the last time in 1972.

"Apollo: Missions to the Moon" kicks off an entire "Space Week" of documentaries on National Geographic. Some of these shows will run multiple times; below are the dates each show will air that week, or air for the first time.

"'Apollo: Missions to the Moon' unveils what was happening not only on the ground at mission control but also in the homes of the families and friends who stood by as their loved ones took to the skies,” Jennings said in the statement. "The whole world stopped for a moment to rejoice and take pride in the boundless sense of courage and optimism that Apollo made possible."