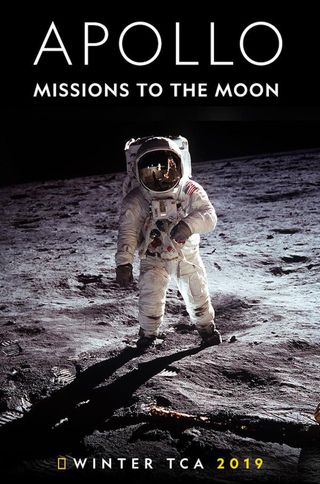 The poster for "Apollo: Missions to the Moon."
(Image: © Photo by Vince Bucci/National Geographic/Picture Group)

Apollo 11's historic magnitude is etched in Americans' minds, but behind the "one small step" are unknown stories that have slipped through the cracks.

A forthcoming documentary showcases some of these moments in an unusual fashion, taking the viewer into the era of Apollo and the space race, from Sputnik's launch to the shuttle era. As a space author and historian, I was thrilled to be hired to consult on this project, in particular, because I'd just completed a book on Apollo 11 and had the subject fresh in mind.

Working on the film gave me the opportunity to review the many hours of footage the producers had obtained. Looking for clues and possible errors in that footage was like a Space Age Easter egg hunt. The producer's ambition to tell the film in a real-time, you-are-there narrative style intrigued me. This is not your typical "voice of God" documentary; this is something much richer and much, much harder to make.

That's what sets "Apollo: Missions to the Moon" apart from many remembrances of the space race.

"The point of the film is to create something almost like a time machine," Tom Jennings, the producer and director of the film, said during a panel held at the annual Television Critics Association Awards held in California in February. "National Geographic talks a lot about going to faraway places to explore the world. In a sense, we explore archives. It's kind of like if you can imagine a footage archive that looks like the final scene in "'Indiana Jones.'"

By treating NASA's archives as a destination to explore, the team behind the documentary was able to find and highlight lost audio and video gems, he continued. "We go in, and we take a deep dive and try and find things that haven't been seen in a long, long time and create a storyline that makes you feel like you're watching a motion picture — but everything in it is real."

That footage explores some lesser-known events surrounding the missions. Besides some stunning, digitally retransferred and enhanced shots I’d never seen (and I’ve seen most of them), there were audio recordings that were also new to me — it was like a new window on the history of Apollo. "One of the most unusual things was footage from the day Apollo 11 landed of a drive-in church in Garden Grove, California," Jennings said of his favorite of these discoveries. "It's the middle of the day, and the priest is standing up there in front of a hundred cars, preaching, and people are praying in their cars."

There are other wonderful and rare moments in the film, which rescues some lost voices from mission control. The producers gained access to some old 30-track recordings from the control room. These had seen little use, because the machines capable of playing them were long gone.

The recordings differ from the Apollo audio that audiences have heard before. Typically, during mission broadcasts, we hear only one voice, that of Capcom, the person talking directly to the astronauts. Instead, these recordings include 30 different voices from around the room.

The effect is particularly poignant during the perilous Apollo 13, when mission control had to scramble after an oxygen tank exploded. "We're able to hear, in real time, not just what's happening with the one line going up to space and coming back," Jennings said. "It's almost like music to me, all these voices coming in and out, all trying to figure out how to bring these guys back home."

The jackpot includes roughly 10,000 hours of recordings, and much of those from Apollo 11 and 13 have been digitized. "They're marking it so that we can marry it with the actual footage that, up until now, has been a silent movie," Jennings said. "So now, you're getting to experience it much like ['Apollo 13' film director] Ron Howard would make a motion picture."

As he worked on the film, Jennings revisited his own experience of the Apollo program as well. "The biggest thrill for me was going through the Apollo 8 footage," Jennings said. "I was 7 years old at that time and lived in Cleveland. I remember going to the corner store, crunching through frozen snow, and I had to hurry back to make sure I got home in time for the Christmas Eve broadcast from Apollo 8.

"I have such a vivid recollection of that Christmas Eve, looking at the moon and trying to figure it out — they are up there, and I'm going to watch them on TV," Jennings added. "It was just beyond a kid's comprehension. And now that I've gone through all the footage, it's even more amazing to me today."

He said he hopes the film inspires a similar experience in his viewers. "We're exploring the past and trying to bring it into the present for people who remember it," Jennings said. "They might see it in a different way for the first time. And for people who've never lived through it, they're going to be able to experience it in a way that nobody else has told them before."

"Apollo 11: Missions to the Moon" will premiere on the National Geographic channel in July during the network's "Space Week."

Rod Pyle is an author and editor-in-chief of the National Space Society's "Ad Astra" magazine and author of “First On the Moon: The Apollo 11 50th Anniversary Experience” coming out in April 2019. Follow us on Twitter @Spacedotcom and on Facebook.