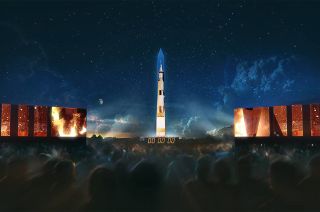 The National Air and Space Museum will use projection mapping to transform the Washington Monument into a Saturn V rocket to mark 50 years since the moon landing, July 16-20, 2019.
(Image: © Smithsonian)

The Washington Monument will transform into a Saturn V rocket, Times Square will turn into Tranquility Base and the "Eagle" will land nightly at the Rose Bowl in celebration of the 50th anniversary of the first moon landing.

More than 250 events spanning all 50 of the United States and countries around the world are set to launch over the next two weeks to mark the half century since Apollo 11 astronauts Neil Armstrong, Buzz Aldrin and Michael Collins made history on the first moon landing mission. From local libraries to renowned public venues, the celebrations include specially-composed concerts, astronaut appearances, multi-day festivals and gala dinners, as well as screenings, statue dedications and even world-record rocket launches.

collectSPACE.com has compiled a calendar of many of the Apollo 11 50th anniversary events but here are some of the highlights.

On Friday (July 5), President Donald Trump signed into law a bill authorizing the use of the National Mall in Washington, D.C., to commemorate the moon landing. The Apollo 50 Festival, hosted by the Smithsonian's National Air and Space Museum and NASA with support from Boeing and Raytheon, will run from July 18 through July 20 — the latter, the 50th anniversary of the landing and moon walk.

The festival stage and 20 tented displays will host hands-on exhibits and activities provided by the space agency, Lego and PBS's "Ready Jet Go!" as well as speakers including astronauts and scientists, Mythbuster Adam Savage and more.

Then, on July 19 and 20, a special 17-minute show, "Apollo 50: Go for the Moon," will combine full-motion projection-mapping artwork on the monument and archival footage on screens on the National Mall to recreate the launch of Apollo 11 and tell the story of the first moon landing.

Between the moon and New York City

On July 20, 1969, the public gathered in New York City's Times Square to witness the first boot prints being made on the lunar surface. Fifty years later, the moon is coming to Manhattan in the form of a boot print made by the people.

Artist Helen Marshall of The People's Picture will debut her giant, floor-based mosaic of a moon boot print populated with the photos of people from around the world as part of a multimedia celebration of the first moon landing. The July 20 event, which promises to bring Tranquility Base to Times Square, will also feature video from the historic moon landing on some of the Square's iconic digital screens.

"Our goal is to recapture that spirit and give thousands the opportunity to put themselves in the place where only 12 men have gone before and to share this historic moment, just like people did 50 years ago," Andrew Aldrin, son of Apollo 11 astronaut Buzz Aldrin and president of the Aldrin Family Foundation, a partner in the People's Moon event, said in a statement.

"Through this celebration, we hope to inspire today's generation, give them hope for the future like Apollo did for generations before, and help them realize that their own 'giant leap' is right within their grasp," said Aldrin.

At the same time that the moon landing video is playing in Times Square, it will also appear on screens on London on the Lights in Piccadilly Circus in the U.K. and at the Art Science Museum in Marina Bay in Singapore. Some of the people's photos from Marshall's mosaic will also make their way to Kennedy Space Center Visitor Complex in Florida as a permanent digital display.

The Apollo 11 mission launches from Earth and lands on the moon nightly in a $15 million stage show that is now at the Rose Bowl in Pasadena, California.

Performed inside the 1,600-seat "Lunar Dome," the Apollo 11 Immersive Live Show features 40,000 square feet (3,700 square meters) of 360-degree video and a full-size replica of the "Eagle" lunar module that brings the events from 50 years ago to life.

"A lot of people know the story of Apollo 11, they know that three men went to the moon and two of them walked on the moon. What we're hoping to do is expand on that story and tell what is essentially the untold story of what it took to get that flight to the moon," said director Scott Faris in a statement. "This show is not like a movie at all. It is an original story, presented in a custom-built space, with a full cast, state-of-the-art projections and the most dramatic tale you have ever seen."

"From the moment the audience walks in, they are transported to another world," said Faris.

The Apollo 11 Immersive Live Show is at the Rose Bowl through Aug. 11, before moving to Costa Mesa and then Houston, as the start of a planned three-year tour.

Other standout events celebrating the 50th anniversary of Apollo 11 include:

Click through to collectSPACE for the full Apollo 11 50th Anniversary event calendar.