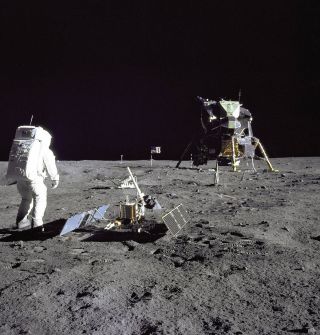 Astronaut and lunar module pilot Buzz Aldrin is pictured during the Apollo 11 extravehicular activity on the moon.
(Image: © NASA)

"One giant leap for mankind" is such a well-known expression of the Apollo 11 mission's success that, for many, it might mask the difficulties during that historic descent toward the lunar surface.

Apollo 11 astronauts Neil Armstrong and Buzz Aldrin had to troubleshoot unexpected problems, like a "lumpy" lunar gravitational field, a rocky landing site and some extra oomph at the start of the lunar module's journey.

First, a brief refresher on the three spacecraft in the mission: The Columbia spacecraft, also known as the command module, is where Armstrong, Aldrin and astronaut Michael Collins lived on their journey to the moon. The service module contained the main propulsion system, and the third critical piece to Apollo 11 was Eagle, or the lunar module, which separated from Columbia to bring Armstrong and Aldrin to the moon's surface.

To land, the astronauts first put the command and lunar modules into a circular orbit 60 nautical miles (111 kilometers) above the lunar surface, according to NASA's History Office. From there, the lunar module crew would perform a descent orbit insertion burn and would start the powered descent from the low point in their new orbit.

But something happened when the lunar module separated. "It kind of popped like a cork," NASA's Lunar Reconnaissance Orbiter project scientist, Noah Petro, told Space.com.

Petro inherited his interest in the moon; his father, Denis Petro, was a program engineer who helped build parts in the lunar module, including the lithium-hydroxide and oxygen-exchange canisters that made breathable air for the crew. Father and son are featured in the second episode of the audio series "NASA Explorers: Apollo."

The cork pop that Noah Petro described came from built-up pressure between the command and lunar modules.

The mission staff had planned everything down to the second; they knew what changes in velocity to expect in three different dimensions and how to reach the center of a landing ellipse, the curved swath of lunar surface within which the lunar module was supposed to land.

But a depressurizing procedure between the command and lunar modules wasn't completely effective, Petro said. So when Aldrin and Armstrong undocked, the remaining pressure put a little bit of extra velocity into the lunar module, and that, coupled with other errors, nudged the astronauts a bit off target.

Petro emphasized that they weren't lost, but rather, were going long in the ellipse. "It wasn't like they were just wildly off course," he said. "Fortunately for them, their landing didn't really require them to do to a particular location." The Apollo 12 mission that followed proved that NASA could land in a set place.

NASA had selected several landing sites that were located near the moon's equator and seemingly free of large objects that could imperil the Apollo 11 landing.

Unfortunately, the center of the landing ellipse turned out to be a football-field-size crater full of boulders, according to Petro. "Armstrong had to take control and land downrange, and that [maneuver's difficulty] was exacerbated because they were landing long from where they had planned in the middle of their landing ellipse," Petro said.

The mission also faced uncertainties regarding the gravitational field of the moon, which Petro described as "lumpy" and irregular.

"Underneath some of the very large basins, there are these concentrations of mass, called a mascon," he said. "And so that lumpiness … means that something in orbit, particularly at low orbit like the Apollo command module or lunar module, is perturbed [or] nudged by those changes in the gravity field."

Even on Earth, gravity isn't entirely even. Petro said that areas where the crust is thicker, like under the Himalayan Mountains, have stronger gravity than areas with a thinner crust, like regions found under an ocean.

But the lunar topography is not as extreme as Earth's, and the mascons on the moon appear relatively flat on the surface. Modern missions like the Lunar Reconnaissance Orbiter and NASA's GRAIL project have led to "an unprecedented understanding" of the lunar gravity field, Petro said.

Despite the challenges it faced, the lunar module ultimately touched down safely, and the Apollo 11 mission was a success for NASA. The incredible feat was made possible by the hard work of the entire Apollo staff, from the well-prepared Apollo 11 astronauts, who spent 30% to 40% of their preparation time in the lunar module trainer, to the many engineers who created life-support systems and communications networks to assist the astronauts' journey.

Some of those workers' names are inscribed on the moon's surface. Petro heard from his father that the engineers all etched their names into the metal of the astronaut life-support backpacks, which were left behind on the moon. "You'll find my dad's name," Petro said, "which is really cool!"