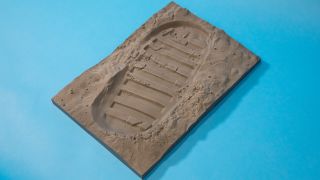 You can now have this piece of lunar history in your home.
(Image: © Space.com)

You can now have a souvenir from the Apollo 11 moon landing in your home in the form of a life-size replica of one of the first boot prints on the lunar surface.

Ahead of the upcoming 50th anniversary of Apollo 11, Master Replicas Group has commemorated one of the most iconic images taken during the lunar mission. The company, which specializes in pop culture and science fiction collectibles, molded a 3D, life-size replica of astronaut Edwin "Buzz" Aldrin's boot print on the moon's surface.

"It's definitely Buzz, not Neil [Armstrong]," Steve Dymszo, CEO of Master Replicas Group, told Space.com. "They actually have different boot sizes, and there are specific marks on the boot."

Aldrin and Armstrong landed on the lunar surface on July 20, 1969, and took a 2.5-hour moonwalk outside the lunar lander together the following day.

The team at Master Replicas used the high-resolution photo of the boot print taken on the moon and created a 3D model of it through photogrammetry, a technology that produces measurements from a photograph. The model was created using a resin cast, which means it is lightweight yet durable.

A few test samples were even thrown across the Master Replicas warehouse and did not break, according to Dymszo.

The bootprint replica will sell for $195 — the high price is mainly due to the quality in manufacturing. The cast was created by Smooth-On, a casting and molding company based in the U.S., which meant a higher production cost than if it had been outsourced, said Dymszo.

"This is a big piece," he added. "So we wanted to do it here because of the high quality."

You can order your own Apollo 11 bootprint online from Master Replicas here.