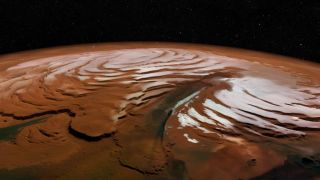 Scientists think they've stumbled on a new cache of water ice on Mars — and not just any ice but a layered mix of ice and sand representing the last traces of long-lost polar ice caps.

That's according to new research based on data gathered by NASA's Mars Reconnaissance Orbiter, which has been circling the Red Planet since 2006 and has just marked its 60,000th trip around Mars. On board the spacecraft is a radar instrument that can see about 1.5 miles (2.5 kilometers) below the planet's surface — and in that data, scientists see lots and lots of ice.

"We didn't expect to find this much water ice here," lead author Stefano Nerozzi, a doctoral student in geology at the University of Texas Institute for Geophysics, said in a statement released by the American Geophysical Union, which published the new research. "That likely makes it the third largest water reservoir on Mars after the polar ice caps."

That is a lot of water. And the sheer amount of water ice in the area is backed up by a second study done by an overlapping team of scientists. That research used gravitational data about Mars collated by NASA from several of its missions to the Red Planet. But by this technique, too, the region comes up chock-full of water ice — enough that if you melted it down and spread it evenly around the planet, it would flood Mars by about 5 feet (1.5 meters).

Even more intriguingly, it isn't pure ice — the radar instrument picked up several different ice surfaces within the region in a pattern that suggests alternating bands of ice and sand.

If that finding holds up, these layers might represent the remains of ice caps that ornamented Mars' poles hundreds of millions of years ago. If that, too, is the case, the layers could be evidence of how the Martian climate has warmed and cooled over the eons in response to tiny changes in the planet's orbit and tilt.

The new research also helps scientists map out where water resources can be found on Mars — and that's vital to inform the search for life, since if there is life or its traces, they are most likely near water.

"Understanding how much water was available globally versus what's trapped in the poles is important if you're going to have liquid water on Mars," Nerozzi said. "You can have all the right conditions for life, but if most of the water is locked up at the poles, then it becomes difficult to have sufficient amounts of liquid water near the equator."

The instrument that spotted the layers isn't the only radar instrument on the Mars Reconnaissance Orbiter. A second device on board has also peered below the Red Planet's surface, and in July, a team of scientists published findings suggesting a lake of very salty water buried under a mile (1.6 kilometers) of ice at the south pole of Mars.

The research suggesting layered deposits and the research supporting the estimated volume of ice is described in two papers published today (May 22) in the journal Geophysical Research Letters.