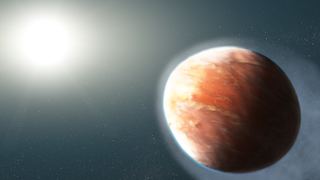 An illustration of Planet WASP-121b orbiting its host star, which is even hotter than our sun.
(Image: © NASA, ESA and J. Olmsted)

Scientists scored a touchdown when they observed heavy metals escaping from the surface of a football-shaped exoplanet that's way too hot to handle.

The large and gassy "hot Jupiter," called WASP-121b, orbits so close to its sun that its temperature is 10 times greater than that of any other known planet. Its odd, football-like shape is also due to the planet's close proximity to the host star as it is on the verge of being ripped apart by the star's gravity.

Using the Hubble Space Telescope, the group of scientists observed heavy metals, such as iron and magnesium, escaping through the surface of the exoplanet — marking the first time heavy metals were observed floating away from an exoplanet's upper atmosphere.

"Heavy metals have been seen in other hot Jupiters before, but only in the lower atmosphere so you don't know if they are escaping or not," David Sing a professor at the Earth and Planetary Science department at Johns Hopkins University in Maryland and lead author of the study, said in a statement by NASA. "With WASP-121b, we see magnesium and iron gas so far away from the planet that they're not gravitationally bound."

The temperature of the exoplanet's upper atmosphere reaches 4,600 degrees Fahrenheit (2,538 Celsius), according to the statement. Therefore, unlike other hot Jupiters that are still cool enough to condense iron and magnesium into clouds, this sizzling hot world emits the gases from its surface. Additionally, the exoplanet is also described as "so big and puffy" that its gravity is relatively weak compared to other planets, making it easier for the gases to escape.

"This is a planet being actively stripped of its atmosphere," Sing added. "In the case of WASP-121b, the hydrogen and helium gas is outflowing, almost like a river, and is dragging these metals with them. It's a very efficient mechanism for mass loss."

The escaping heavy metals could also contribute to the exoplanet's rising temperatures. "These metals will make the atmosphere more opaque in the ultraviolet, which could be contributing to the heating of the upper atmosphere," Sing said.

Scientists are hoping to further study the exoplanet using NASA's upcoming James Webb Space Telescope, scheduled to launch in March 2021, in order to search for water and carbon dioxide under ultraviolet light.

The study was published on August 1 in The Astronomical Journal.