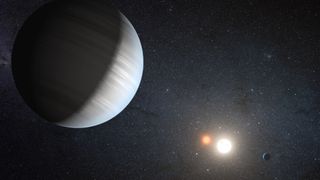 An illustration of Kepler-47, another exoplanet orbiting around two suns.
(Image: © NASA/JPL-Caltech/T. Pyle)

A "preteen" exoplanet, fully grown but still undergoing some changes, was recently discovered orbiting a young star in a binary system, and the find could provide some insight on how planets formed in our own solar system.

Scientists at Dartmouth College in New Hampshire observed the planet using NASA's Transiting Exoplanet Survey Satellite (TESS), which launched in April on a mission to look for alien planets orbiting the brightest stars in the night sky. The planet was discovered in November 2018 by NASA satellite and later confirmed by the group of scientists at Dartmouth in March.

The exoplanet, named DS Tuc Ab, was found in a two-star system (it has two suns) but only orbits one of its stellar parents. It makes one orbit every eight Earth days, researchers said. They estimated the star system to be around 45 million years old. For comparison, our solar system is around 4.6 billion years old.

Due to its young age, the exoplanet is still experiencing some rapid changes, such as losing atmospheric gas due to the radiation its host star is emitting, according to a statement by Dartmouth College.

"One of the overall goals of astronomy is understanding the big picture of how we got here, how solar systems and galaxies take shape, and why," Elisabeth Newton, assistant professor of physics and astronomy at Dartmouth and co-author of the study, said in the statement. "By finding solar systems that are different from our own, especially young ones, we can hope to learn why Earth and our own solar system evolved in the ways that they did."

By observing the exoplanet's evaporating atmosphere, scientists hope to predict how the world will evolve over the next billions of years. As a result, they hope to better understand how atmospheric loss may have affected older planets, including Earth.

Thousands of exoplanets have been discovered in the past two decades, but only a handful of those alien planets orbit a young star, according to the statement. Scientists are always looking to observe young worlds as they evolve in order to gain some insight into how planets form.

This particular planet is about six times the size of the Earth in diameter. Due to this world's size, which is between those of Neptune and Saturn, the scientists believe that it has a similar composition to that of the larger planets in our solar system.

DS Tuc Ab has two suns, and it orbits around the binary star system in a short period of eight days. This binary is one of the brightest young star systems ever observed, which makes the observation of the planet much easier, Newton said.

"The star's brightness lets us study the planet in detail because the more photons you have, the better statistics you have," she said. The planet was discovered using the transit method, in which scientists look for small changes in a star's brightness that occur when the planet crosses the star's face and therefore blocks some of the sun's light.

In future investigations, the researchers are hoping to measure this exoplanet's mass and determine what type of molecules are present in its atmosphere, the study said.

This new study was published July 23 in The Astrophysical Journal Letters.