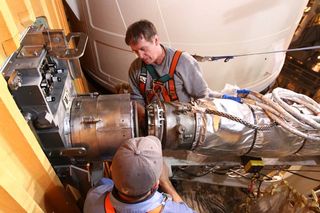 On Launch Pad 39A at NASA's Kennedy Space Center in Florida, technicians reattach the vent line to the ground umbilical carrier plate, or GUCP, on space shuttle Discovery's external fuel tank during repairs for its STS-133 mission in fall 2010.
(Image: © NASA/Ben Smegelsky)

Engineers have completed work to plug a potentiallydangerous hydrogen gas leak and reinforce cracked metal ribs on Discovery'shuge external tank. The shuttle is sitting atop a seaside launch pad at NASA'sKennedy Space Center in Cape Canaveral, Fla., awaiting a launch that hasalready been delayed more than a month.

"The stringer cracks were repaired last week and foamwas reapplied during the weekend," NASA spokesman Allard Beutel toldSPACE.com in an e-mail.

A separate crack in the exterior foam insulation onDiscovery's fuel tank was also repaired. Workers are now trimming the foam toachieve ideal aerodynamic shape and doing additional X-ray scans to ensurethere are no other potential problems.

So far, no other issues have been detected, and"they're pretty much done with the overall repair work," Beutel said.

On Wednesday (Nov. 24), shuttle program managers willanalyze their rationale for flying Discoverywith the completed repairs. If the officials are satisfied and agree that theshuttle is ready for its mission, NASA will proceed with a final review on Nov.29 to clear Discovery for liftoff.

Discovery's STS-133 mission will be the shuttle's39th and final flight, before it is retired along with the rest of NASA'sorbiter fleet in 2011.

The expedition will send commander Steve Lindsey, pilot EricBoe, and mission specialists Alvin Drew, Tim Kopra, Michael Barratt and NicoleStott to the International Space Station on an 11-day mission. The spaceflyerswill deliver a storage room for the orbiting laboratory, in addition to a humanoidrobot designed to assist astronauts with their work in space. Drew and Kopraare also scheduled to perform two spacewalks.

The upcoming window to launch Discovery opens on Nov. 30 andwill close around Dec. 6. NASA's shuttle Endeavour is scheduled to fly to thespace station in the next available window, which opens in late February.?

NASA is retiringthe space shuttle fleet as part of its new direction, which aims to sendastronauts to an asteroid by 2025, and ultimately to Mars in the 2030s.

After Discovery's flight, there is only one more scheduledmission, a flight by shuttle Endeavour to the space station. NASA, however, ishoping to obtain final funding approval for a third shuttle mission, whichwould fly no earlier than June 2011.

Congress and President Obama have authorized plans for theextra shuttle mission, but the measure is still awaiting a final congressional appropriationsreview.