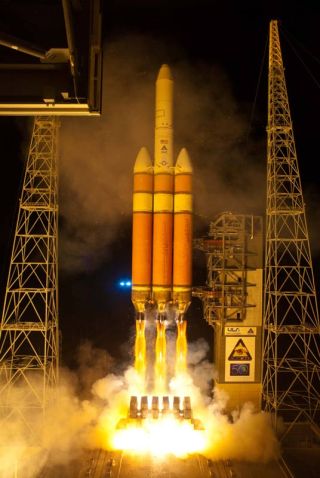 A huge unmanned rocket carrying a secret new spysatellite for the United States roared into space Sunday (Nov. 21) to deliverwhat one reconnaissance official has touted as "the largest satellite inthe world" into orbit. ?

The satellite, called NROL-32, launched after a series of delaysfrom technical glitches. The most recent glitch, a pair of faulty temperaturesensors, thwarted a Nov. 19 launch attempt.

The exact purpose of the new spysatellite NROL-32 is secret, but one NRO official has hinted at the hugesize of the reconnaissance spacecraft.

In a Sept. 13 address at the Air Force Association's Airand Space Conference, NRO director Bruce Carlson, a retired Air Force general,told an audience that this Delta 4 Heavy rocket would launch "with the largestsatellite in the world on it."

For comparison, in July 2009 a satellite calledTerreStar-1 ? touted as the world's largest commercial satellite ever built ?launched into space atop an Ariane 5 rocket. TerreStar-1 is 15,233 pounds(6,910 kg) satellite equipped with a huge 60-foot (18-meter) antenna. Last week, the SkyTerra-1 mobile communications satellite launched with its own giant antenna, one that is about 72 feet (nearly 22 meters) across.

The Delta 4 Heavy rocket is the United States' biggestunmanned rocket currently in service and has 2 millions pounds of thrust, making it the most powerful liquid fueledbooster available today. A Delta 4 Heavy rocket stands 235 feet (72 meters) tall and is actually made up ofthree boosters, each called a Common Booster Core, arranged in a line to giveit a three-column appearance.

The rocket is built and launched by the United LaunchAlliance, a partnership between Lockheed Martin and Boeing. It made its firstflight in 2004 and is capable of launching payloads of up to 24 tons intolow-Earth orbit and 11 tons toward the geosynchronous orbits used bycommunications satellites.

Tonight's launch marked the fourth launch of a Delta 4 Heavy rocket and the second satellitelaunch in three months for the NRO. An Atlas 5 rocket launchedthe NROL-41 reconnaissance satellite on Sept. 20.

In his address last month, Carlson said that the currentplan for NRO satellite missions ?"is the most aggressive launch campaignthat the National Reconnaissance Office has had in 20 years, almost a quarterof a century."

Carlson went on to say that new satellites are vital forthe NRO's mission, and are needed to replace older satellites before they fail.

"Theother thing I can tell you is these are very important, because they all go toupdate a constellation which is aging rapidly," Carlson said last monthaccording to an NRO transcript. "We bought most of our satellites forthree, five, or eight years, and we?re keeping them on orbit for ten, twelve,and up to twenty years."

"Now when I buy something people complain about howexpensive it is, but nobody ever complains when it?s time to die and it keepsright on ticking," Carlson added. "Some of these guys are like theEnergizer bunny and they have really done marvelous work."