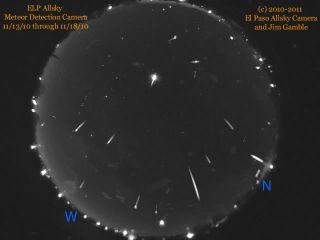 The Leonidmeteor shower of 2010 may not have dazzled, but it still caught the eyes of die-hardskywatchers who awoke before dawn today to catch the moderate shooting starshow at its peak.

SkywatcherJim Gamble of El Paso, Texas has been observing the Leonids meteor displaythroughout the month. He used an all-sky camera to record the brightstreaks created by the meteors and created a composite snapshot of this year'sLeonids shower between Nov. 13 and today (Nov. 18). [Gamble's composite photo of the Leonid meteor shower]

The Leonidmeteor shower returns every year in mid-November. It occurs when the Earthpasses through a stream of dust leftover from the Comet Tempel-Tuttle. Thematerial hits the atmosphere and then flares up as "shootingstars."

When theEarth passes through the denser parts of the stream, the meteor count can soarto hundreds or thousands in an hour. [Gallery:Spectacular Leonid Meteor Shower Photos]

This year,however, the Earth is passing through a less dense part of the comet debrisstream, astronomers have said.

The Leonidmeteor shower of 2010 promised between 15 and 20 meteors an hour forskywatchers graced with clear skies, according to predictions from meteorexperts. The best time to observe the show was in the hours before sunrise onWednesday (Nov. 17) and today.

Internationalmeteor counts have officially pegged this year's Leonids at less than 25meteors an hour, according to the website Spaceweather.com, which monitorsspace weather and skywatching events.

Still, thepromise of only a modest meteor show did not dissuade avid meteor gazers.

InJerusalem, skywatcher Yaron Eini made it a group event, but was sureeveryone bundled up warm while observing.

"We hada nice weather for this season," Eini toldSpaceweather.com. "It was comfortable for us to lay down in oursleeping bags and enjoy the modest Leonids meteor shower."

The nextmajor meteor show for skywatchers will be the Geminid meteor shower, which willpeak on Dec.13 and 14.