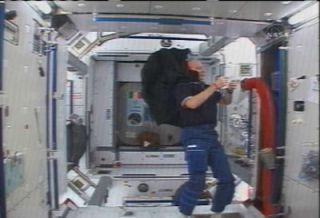 The International Space Station ? which is coming up on adecade of continuous human habitation ? is a celebrated success in our species'quest to learn to live in space. Yet life in orbit has its serious trials, andmishaps along the way have proven just how much we still have to learn aboutbeing a spacefaring civilization.

The spacesuit gloves astronauts wear while working outsidethe station during spacewalks have proven to be hazardous to their health.

A recent study found that about 10 percent of astronauts are victims of "fingernailtrauma" fromgloves, with a number of them losing a fingernail entirely because the glovepinched their fingers and reduced circulation.

Typically,the damage is worse the larger an astronaut's hand is.? Maybe NASA should lookfor petite spaceflyers.

Weightless living can have some pretty odd consequenceswithout even going outside. Take, for example, the attack of the flying wasabi.

In March 2007 astronaut Sunita Williams was trying tosqueeze some of the spicy green condiment onto her makeshift space sushi, whena squirt got loose, ultimately splattering the walls with wasabi and hidingstray droplets around the module.

It took a while to get the wasabi smell out after it hadflown all over the place, Williams said at the time. And she had to forgowasabi on future space meals, saying it was just "too dangerous."

While floating on the space station can be fun, getting toand from it can be a rough ride. Tripson the Russian Soyuz spacecraft, in particular, reportedly pack quite apunch of G forces.

"I've heard it described as a train wreck followed by acar crash followed by falling off your bike," NASA astronaut TracyCaldwell Dyson said recently before she flew home from the station on oneherself.

After she had experienced the trip, she said the rumors weredead on.

"It certainly didn?t disappoint," Caldwell Dysontold SPACE.com after her return. "All the bangs, bells, whistles andsensations were there. The magnitudes of some things were a little surprising,but for the most part it was a pretty exciting ride."

Though it's not just Tang and freeze-dried ice cream thesedays, foodin space still leaves something to be desired.

Fresh fruit and vegetables are scarce, for example, and groundstaples like bread are impractical because they leave crumbs, which inmicrogravity fly around everywhere instead of settling on the floor, and becomea disaster to clean up. (Instead astronauts favor tortillas, which create fewercrumbs).

And astronauts tend to get sick of the same roster ofre-heatable meals rotated on an eight-day schedule.

In the winter of 2004, however, an unmanned cargo ship dueto deliver fresh food and supplies to the space station was delayed. Inresponse, the crewmembers onboard ? Expedition 10 commander Leroy Chiao of NASA and flightengineer Salizhan Sharipov of Russia ? had to ration their meals.

Thetwo ended up cutting their regular foodconsumption in half to conserve supplies, then making up for the lost caloriesby eating abundant desserts and candies. "It wasn't an unhealthy diet, butit wasn't an ideal diet either," Chiao saidat the time.

While the station has grown considerably over the 10 yearsit's been permanently inhabited, many spaces are still a tight squeeze. And forthe last year and a half, the normal crew size aboard the orbiting lab havebeen six, meaning what space there is has been shared by more bodies.

Sleeping can be particularly cramped inside an astronaut's"crew quarters" ? essentially an alcove the size of a phone booth ? andthere are other hazards of catching some Zzz's in a free floating sleeping bag.

"Duringthe night while you're sleeping, you might start drifting and end up somewhereyou didn't intend to be in the first place," Canadian astronaut JuliePayette said in 2009.

Yetoverall, the coziness of slumbering without gravity's incessant pull makessleeping in space rather comfy, Payette said.

The lack of showers in space often puts a serious damper onthe experience.

Microgravity makes it impossible to have a normal showerwhere water falls from a stream and falls docilely into a drain. Instead,astronauts on the International Space Station use a squirt gun that shoots outwater and a wash cloth. They also have a special rinse-less shampoo to keeptheir hair clean.

"We wash like we would if we were on an expedition or acamping trip or something," Payette explained. "It works."

Still, who wants to keep that up for six months? Especiallywith the aforementioned tight living quarters!

One of the peskiest recurring problems on the station is thetoilet situation.

There are two toilets on the space station ? one in theRussian segment, and one in the United States modules. But both have beenbalky, breaking and requiring on-orbit plumbing jobs to get them working again.

Then there's the issue of what happens to the waste water ?as of May 2009, urine isrecycled into clean drinking water, and is also recycled into water forbathing and food preparation.

"It'ssort of one of those horrible and fascinating kind of things. It's like,'You're going to drink urine?'" said astronaut Sandra Magnus, who wasliving on the station when the urine recycling system was installed."We're not, we're drinking processed water that started as urine."

Beyond the daily nuisances, astronauts have to deal withserious health consequences from their time in orbit. One of the mostsignificant of these is the effect on their bones.

A recent study found that astronauts' bone strength dips by at least14 percent during a half-year stay in space. Other research indicates that anastronaut's bone mineral density can decrease by between 0.4 percent and 1.8percent each month they are on the station, leading to greater risks offractures and osteoporosis later in life.

While there is no complete fix forthis problem, astronauts are diligent about bone-strengthening exercises whilethey're on the station, and undergo extensive rehabilitation once they're backon the ground to try to avoid possessing the bones of a 90-year-old.

Space sickness, too, can affect the best of 'em.

Acclimatizing to life in zero gravity, especially since nosimulator can reproduce microgravity on the ground, takes time. It's notuncommon for astronauts to lose their lunch after liftoff before they evenreach the space station.

And, to make matters worse, spewing chunks in space createsrather more of a mess than it would on Earth, since projectile vomit doesn'tproject toward the ground.

Perhaps the hardest part of life in space is the feeling ofisolation astronauts can get when they spend half a year removed from the wholeplanet, especially their friends and family. While astronauts can combat theloneliness by bonding with crewmates and making frequent calls home, theysometimes have to miss major life events back on Earth.

In December 2007, NASA astronaut DanielTani's mother died in a car accident while he was living on the spacestation. Tani had to grieve from more than 200 miles away in orbit, until hecame back to Earth about two months later.

And in2004, NASA astronaut Michael Fincke was forced to miss the birth of his secondchild, when his wife gave birth to daughter Tarali while he was serving along-duration mission during the station's Expedition 9. He was able to meethis daughter four months later when he finally landed.