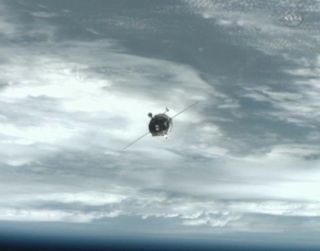 The Russian Progress 39 cargo craft approaches the International Space Station for docking on Sept. 12, 2010 in this view from an exterior camera.
(Image: © NASA TV [Full Story])

A new Russian cargo ship pulled up to the InternationalSpace Station Sunday to deliver a fresh load of food and supplies for theoutpost's astronaut crew.

The unmanned Progress 39 space freighter docked at thespace station right on time at 7:58 a.m. EDT (1158 GMT) as both spacecraft sailed about 216 miles (347 km) above Mongolia.

The automated Progress 39cargo ship docked itself flawlessly with no need for Skvortsov and his crew totake remote control of the craft like they did with a previous Progress 38 supplyship in July when it failedto dock on the first try. The spacecraft parked itself at the aft end ofthe station's Russian Zvezda service module. [Graphic:Inside and Out ? the International Space Station]

The Progress 39 spacecraft delivered about 2 1/2 tons ofsupplies to the space station's six-person crew when it arrived Sunday. It blastedoff Friday atop a Russian Soyuz rocket from the Central Asian spaceport ofBaikonur Cosmodrome in Kazakhstan.

The unmanned Progress spacecraft used by Russia's FederalSpace Agency are similar in appearance to the agency's crew-carrying Soyuzvehicles. But the cargo ships carry a fuel pod in place of a crew capsule andare built to be disposable.

With Progress 39's arrival at the space station, the numberof Russian spacecraft parked at the orbiting laboratory is now four. An olderProgress 37 cargo ship and two Soyuz vehicles are docked to other ports on thestation's Russian segment.

One of those Soyuz vehicles will depart the space stationSept. 23 to return Skvortsov and two other station crewmembers to Earth to endtheir six-month space mission.

The departing spaceflyers will leave behind threecrewmates on the space station to finish their own staggered six-month mission.Another three crewmembers are due to launch toward the space station in earlyOctober.

Astronauts have been flying to the InternationalSpace Station on rotating missions since 2000. The$100 billion orbiting lab has been under construction since 1998 and is nearlycomplete, with the final assembly mission slated to fly in February 2011.

The next spaceshuttle mission, which will deliver a new storage room and humanoid robotassistant for the station crew, is slated to launch Nov. 1. ?