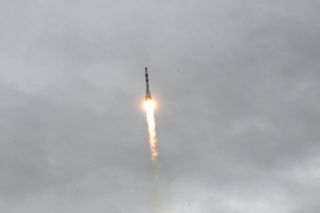 The Progress 39 spacecraft blasted off from the CentralAsian spaceport of Baikonur Cosmodrome in Kazakhstan at 6:22 a.m. EDT (1022GMT) with more than 2 tons of supplies for the station crew. The launch hadbeen delayed from Wednesday due to high winds at the launch site.

Known in Russia as Progress M-07M, the automated spacefreighter will dock at the InternationalSpace Station Sunday at 7:58 a.m. EDT (1158 GMT).?

Progress 39's space station arrival is coming on theheels of the departure of an older Progress cargo vessel, which left theorbiting lab on Aug. 31 to make way for the new delivery ship. That older ship,Progress 38, burned up in the Earth's atmosphere on Sept. 6 as planned.

Russia's Progress cargo ships are similar to thecountry's manned Soyuz spacecraft, but do not have a re-entry capsule for thereturn to Earth. Instead, they carry a fuel pod and are built to be disposed ofin Earth'satmosphere.

The supplies on Progress 39 will support the six peopleliving aboard the space station.

The station's crew is currently made up of threeAmericans from NASA and three Russians representing the Federal Space Agency,but that will soon change.

Half of the crew will depart the space station on Sept.23 to end a six-month mission that began in April. The three stationcrewmembers left behind are flying their own six-month mission, which began inJune. They will be joined by another three-person crew later this month.

The $100 billion International Space Station has beenunder construction since 1998 and is nearly complete, with the final assemblymission slated to fly in February 2011. Astronaut crews have been flying to andfrom the station since 2000.

The next spaceshuttle mission to visit the station is slated to launchNov. 1. That mission on the shuttle Discovery will deliver a new storage roomand humanoid robot assistant for the station crew.