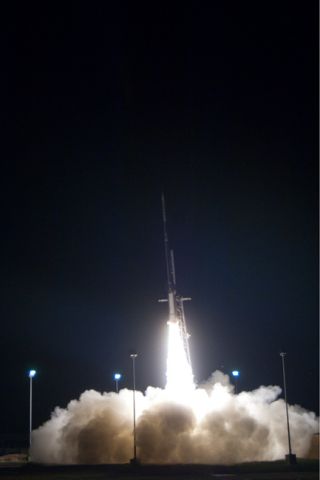 The Black Brant X Rocket lights up the predawn sky over Virginia as it launches from Wallops Island on Aug. 4, 2010.
(Image: © NASA)

A suborbitalNASA rocket lit up the predawn sky above Virginia early Wednesdayduring ademonstration flight to test one of its main motor.

The launchwas aimed at testing new Nihka motor and a variety of other toolsincludingvideo and ignitions systems.

Soundingrockets are researchrocketsused to testequipment or processes for their appropriateness in a spaceflightenvironment. Theycan also be used to launch experiments to study the atmosphere or spaceenvironment.

In thiscase, the main component under test is a third stage Nihka motor, asolid rocketmotor which  hasn't been updated for about 10 years, saidWallops FlightFacility press officer Keith Koehler.

NASA hasplenty of the Nikha motors in storage, but recently ordered a new batchand wantedto make sure they worked properly, Koehler said.

Theproduction and management of Wednesday's launch was conducted byNorthropGrumman, which is in the waning months of a 10-year contract to providethelaunches for NASA.

NASA awardedthe contract, which is worth $310 million over five years, to theOrbital's TechnicalServices Division in Greenbelt, Md. The majority of the contract's workwill beperformed at the Wallops Flight Facility, NASA officials said.