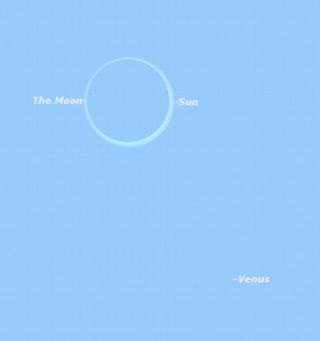 India has launched a fleet of small suborbital rockets tostudy the effects of a stunning Friday solar eclipse ? touted as the longestthis millennium - on Earth?s atmosphere.

The India Space Research Organisation (ISRO) launched 11 soundingrockets in two days to study the partial annular solareclipse, which dominated the sky above southeastern Asia and Central Africatoday.  Thousands of skywatchersin countries where the eclipse was visible marveled at the celestial event.

But only India appears to have launched rockets to seehow the drop in sunlight as the moon blocked part of the sun affected the Earth?satmosphere.

?The eclipse was well visible in southern parts of thecountry,? ISRO officials said in a statement. The eclipse began in the morning(local time) and hit its peak at about 1:15 p.m. local time in India.

India?s Vikram Sarabhai Space Centre launched the Rohinisounding rockets from several sites, including the Satish Dhawan Space Centrein Sriharikota. The rockets were launched in waves, with five launching onThursday to collect pre-eclipse data while six more blasted off today tocompare the after effects.

?All the sounding rocket launches wereconducted to study the effects of the annular solar eclipse on the atmosphericstructure and dynamics,? ISRO officials said.

The eclipse, which only partially blotted outthe sun to leave only a brightring visible at its height, offered a unique opportunity to study how suchevents impact the photochemistry and electrodynamics within Earth?s atmosphere,project researchers said. In addition to a drop in sunlight, lower temperaturesand decreased levels of ionization within the atmosphere can be observed, theyadded.