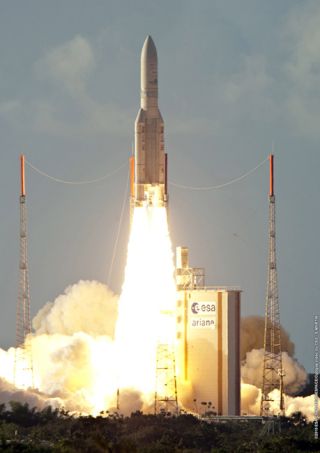 Ariane 5's mission with NILESAT 201 and RASCOM-QAF1R blasts off from the Guiana Space Center in Kourou, French Guiana on Aug. 4, 2010.
(Image: © Arianespace)

The166-foot-tall launchertook offat 2059 GMT (4:59p.m. EDT) and soared into partly cloudy skies over the French-run spacebase inKourou, French Guiana. After turning east from the South Americancoast, theAriane 5 rocketed into the upper atmosphere and shed its twin solidrocketboosters about 2 minutes, 15 seconds after liftoff.

Therocket's hydrogen-fueled first stageconsumed its propellant in 9 minutes and gave way to a cryogenic upperstagethat ignited a few seconds later.

Thesecond stage burned for nearly 16minutes, completing a high-speed transit of the Atlantic Ocean beforedeployingits two payloads in view of ground stations in Gabon and Kenya.

Nilesat201 separated just shy of theflight's 29-minute mark, followed by the jettison of the Ariane's Syldadual-payload adapter less than 2 minutes later. The second stagereleasedRascom-QAF 1R less than 33 minutes after launch.

Bothsatellites were dropped off in anelliptical transfer orbit stretching from 154 miles to a peak altitudeof22,322 miles. The orbital inclination was 2 degrees.

"Itis the 38th success in a row for Ariane5,and since the beginning of 2010, we have launched six majortelecommunicationssatellite, which is more than all of our competitors together," saidJean-Yves Le Gall, Arianespace's chairman and CEO. [Ariane5 Rocket Launches on 50th Mission]

Nilesat201 will enter service at 7 degreeswest longitude, joining two other Nilesat spacecraft and aEuropean-ownedsatellite to provide direct-to-home television, radio and broadbandInternetservices to Africa and the Middle East.

"Iwould like to congratulate the teamof Nilesat for the successful launch of Ariane 5 and Nilesat 201," saidAnas El Feky, Egypt's information minister. "We are truly proud of whatyou achieved tonight. It's a great achievement for the Egyptian mediaand addedvalue to the Nilesat company, which has been very successful in ourregion."

Rascom-QAF1R was ordered to replace a nearlyidentical satellite crippled by a helium leak after launch in 2007. Theglitchforced the first Rascom-QAF satellite to burn more propellant thanexpected,reducing its useful life from 15 years to two or three years.

"Two-and-a-halfyears ago, we were justwitnessing the launch of the first satellite," said Faraj Elamari, CEOofRascomStar-QAF, an African satellite company. "Well, we had to do ittwice. It look a lot of determination and our motivation hasn'tchanged."

"Thisis a big day before us because wehave been on the journey for the Rascom project right from the start asone ofthe shareholders and also as prime (contractor) for the satellite,"Seznecsaid.

Rascom-QAF1R will be stationed at 2.85degrees east longitude with 12 C-band and eight Ku-band transponders,beamingtelevision, telephone and Internet services across Africa.

"Thanksto Rascom-QAF 1R and itsassociated ground equipment, Africa will be able to benefit fromcommunicationsin rural areas at an affordable cost, communications between regionalcapitalsand cities, and between cities and villages," Elamari said.

Accordingto Elamari, Rascom-QAF 1R will helpconnect up to 150,000 rural villages to communications networks.

Thecompany has a backlog of 22 Ariane5 launchesand 17 flights of the Soyuz rocket, which will make its first launchfromKourou in December or early 2011.

Thenext Ariane 5 mission is scheduled forSept. 15 with European and Japanese payloads. Another dual-satellitelaunchwill follow in October or November, and Arianespace will wrap up 2010with thedelivery of an unmanned cargo ship for the International Space Station.