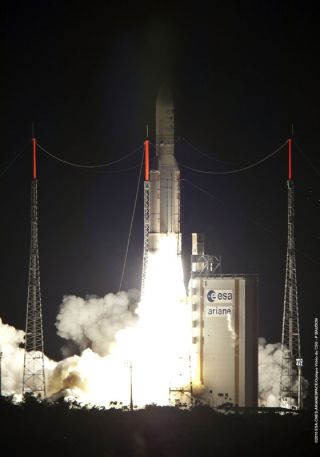 The mission with ASTRA 3B and COMSATBw-2, commencing on Friday, May 21st, was the 50th launch of an Ariane 5 vehicle.
(Image: © Arianespace)

During its landmark 50th launch, Europe's Ariane 5 rocketsuccessfully blasted off from the South American coast Friday evening with acommercial broadcasting satellite and a payload to link commanders and troopsin the German military.

It was the first flight of the market-leading Ariane 5rocket in more than five months.

The launch was delayed two months after last-minuteproblems with a helium pressure regulator and other glitches compelledArianespace to order a quality control review of the Ariane 5 program.

The month-long review cleared the way for Friday'sliftoff after workers replaced the faulty component responsible for a scrub inApril. A top-level audit of the program's quality control practices continues,according to Arianespace officials.

The new part apparently functioned as advertised Friday,and the Ariane 5 rocket blasted off at the opening of a 43-minute launchwindow.

"This launch has taken place a few weeks behindschedule, but its perfect execution demonstrates that in the face ofdifficulties, we did exactly what had to be done," said Jean-Yves Le Gall,chairman and CEO of Arianespace.

Shedding its solid rocket boosters and payload fairing asthey were no longer needed, the Ariane 5 soared to an altitude of 107 miles innine minutes on the power of its cryogenic main stage.

The hydrogen-fueled upper stage ignited and burned formore than 15 minutes to propel the rocket and payloads to nearly 21,000 mph.

The rocket deployed the 12,063-pound ASTRA 3B televisionbroadcasting satellite about 27 minutes after liftoff and jettisoned abarrel-shaped Sylda payload adapter a few minutes later.

The German Armed Forces' COMSATBw 2 satellite separatedfrom the launcher 33 minutes into the flight, wrapping up the 36th consecutivesuccessful Ariane 5 launch since 2003.

"After victory, you deserve it. After defeat, youneed it. After [a successful] launch today, we deserve a glass ofchampagne," said Brigadier General Thomas Franz, chief of thecommunications division of the Joint Support Command in the German Armed Forces.

ASTRA 3B will beam television programming directly tohomes and businesses across Europe from Spain to the Black Sea for the next 15years. Customers in the Middle East and Europe will benefit from two-waybroadband Internet communications provided by the satellite under theASTRA2Connect service.

Built by EADS Astrium and operated by SES ASTRA ofLuxembourg, the spacecraft will position itself in geosynchronous orbit 22,300miles above the equator at 23.5 degrees east longitude. At that location, thesatellite will appear to hover in a fixed spot over Earth to provide consistentcommunications.

"ASTRA 3B is an important satellite for us becauseit will allow us to grow in the Benelux and the Eastern European markets,"said Ferdinand Kayser, president and CEO of SES ASTRA. "It's also animportant satellite because it's one of the largest we have ever launched. Itwill allow us to exploit direct-to-home television and also Internet-via-satellitein Europe and the Middle East, and, therefore, it represents an importantgrowth potential."

The satellite will replace two aging satellites, ASTRA 1Eand ASTRA 1G, at the coveted position in the geosynchronous arc. The two oldersatellites, both launched in the 1990s, will be released for other missions,according to SES ASTRA.

Another satellite, ASTRA 3A, will remain colocated withASTRA 3B to continue providing communications coverage. The craft launchedFriday carries 60 Ku-band and four Ka-band transponders.

Weighing about 5,500 pounds at launch, COMSATBw 2 wasmanufactured by Thales Alenia Space under the management of EADS Astrium, theprogram's prime contractor.

The pair of satellites will ensure the German ArmedForces has uninterrupted access to secure telecommunications, including voiceand data transmissions, and video and multimedia applications.

Germany'snew satellite constellation will reach from the Americas to the Far East.COMSATBw 2 will focus its coverage on Europe and Africa.

COMSATBw 2 will be positioned at 13.2 degrees eastlongitude, where it will conduct its mission for the next 15 years.

"For Germany, this is a major step in extendingcapabilities, especially for our forces out of the area," Franz said."Our aim is clear: provide for the best communications system for ourtroops."

Arianespace will be playing catch-up for the rest of 2010to get off up to seven flights of the Ariane 5 rocket this year. The nextmission is scheduled for late June with the Arabsat 5A broadcasting satellitefor the Middle East and South Korea's COMS 1 satellite to monitor weather,observe oceans and test communications technologies.

More flights will follow at a pace of nearly once permonth for the rest of 2010, if Arianespace is able to launch all of its plannedmissions this year.