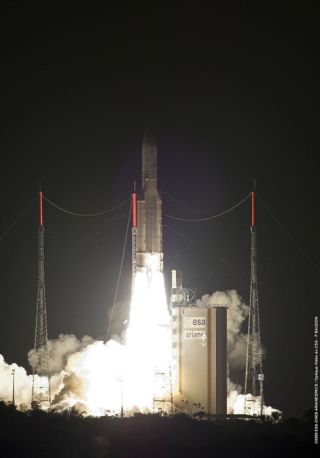 An Arianespace Ariane 5 rocket blasts off with the JCSAT-12 and Optus D3 satellites on Aug. 21, 2009, marking the46th launch of an Ariane 5 vehicle.
(Image: © Arianespace)

Two communicationssatellites built in America for Asian and Australian operators, paired togetherto share a ride into orbit, successfully got there aboard an Ariane 5 rocketFriday night.

Running just likeclockwork, the countdown hit zero precisely on time at 2209 GMT (6:09 p.m. EDT)and the powerful launcher roared away from its jungle launch base in SouthAmerica at nightfall.

The European-made rocketreached the targeted geosynchronous transfer orbit a half-hour later to deployJCSAT 12, a telecommunications satellite for Japan, followed a few minuteslater by the release of Optus D3, a broadcasting spacecraft for Australia.

"I'm particularlyhappy to share this newsuccess with you. It is our 32nd success in a row for Ariane 5," saidJean-Yves Le Gall, chairman and CEO of Arianespace.

"Our workingrelationship with the Asia-Pacific region is under the limelight tonight, andthis further success illustrates that our services and solutions offering isrecognized across the world."

TheAriane achieved a highly elliptical orbit stretching 22,377 miles at itsfarthest point from Earth and 155 miles at the nearest. The satellites will usetheir onboard engines to circularize the orbit and reach geostationary slots,with JCSAT 12 planning five burns and Optus D3 needing four maneuvers over thenext several days.

Lockheed Martin built thehigh-power JCSAT 12 spacecraft in Pennsylvania using the company's A2100 modeloffering. The 8,900-pound satellite is equipped with 30 active Ku-band and adozen C-band transponders for communications services to Japan, theAsia-Pacific region and Hawaii over the next 15 years.

"I'm so relievedtoday, and I want to share my joy and satisfaction with all of you here,"Hideaki Kido, executive officer and group president, SKY Perfect JSAT Corp.,told VIPs gathered in the launch center Friday night.

SKY Perfect JSAT Corp. ofTokyo plans to rename the satellite JCSAT R-A once it's operational in a coupleof months. It will become a new in-space backup spacecraft for the operator'sorbital fleet. The current spare JCSAT is nearing the end of its design lifefollowing a 1997 launch aboard an Atlas rocket from Cape Canaveral.

OptusD3, as its name suggests, is the third in the current generation ofcommunications satellites built in Virginia by Orbital Sciences for theAustralian operator. This latest craft will enable a broadening of servicesprovided from space.

"We're very excitedand reassured with the launch of the D3 satellite this evening," said PaulSheridan, director of Optus Satellite.

Constructed aroundOrbital's Star 2 design with a 15-year life expectancy, the 5,400-pound crafthas Ku-band transponders for relaying communications and direct-to-home televisionacross Australia and New Zealand. It will be positioned at 156 degrees Eastlongitude.

Friday's launch of theworkhorse Ariane 5 was therocket's fourth of seven planned missions in 2009. The year's fifth rockethas been stacked atop a mobile launching platform in preparation to receive itscargo and the sixth vehicle has arrived at the launch site from Europe to beginassembly for its flight.

Next up will be ArianespaceFlight 191 in late September carrying Amazonas 2 and GMS, two communicationssatellites for Spain and Germany.