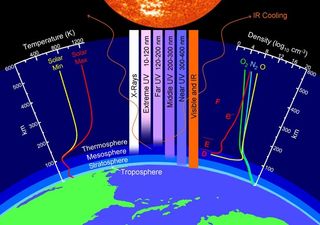 An upper layer of Earth's atmosphere recently collapsed in anunexpectedly large contraction, the sheer size of which has scientistsscratching their heads, NASA announced Thursday.

The layer of gas ? called the thermosphere ? is nowrebounding again. This typeof collapse is not rare, but its magnitude shocked scientists.

"This is the biggest contraction of the thermosphere inat least 43 years," said John Emmert of the Naval Research Lab, leadauthor of a paper announcing the finding in the June 19 issue of the journal GeophysicalResearch Letters. "It's a Space Age record."

The collapse occurred during a period of relative solarinactivity ? called a solar minimum from 2008 to 2009. These minimums are knownto cool and contract the thermosphere, however, the recent collapse was two tothree times greater than low solaractivity could explain.

"Something is going on that we do not understand,"Emmert said.

The thermosphere lies high above the Earth's surface, closeto where our planet meets the edge of space. It ranges in altitude from 55miles (90 km) to 370 miles (600 km) above the ground. At this height,satellites and meteors fly and auroras shine. [Graphic:Earth's Atmosphere Top to Bottom]

The thermosphere interacts strongly with the sun, so is veryaffected by periods of high or low solar activity. This layer interceptsextreme ultraviolet light (EUV) from the sun before it can reach the ground.

Recently, solar activity has been at anextreme low. In 2008 and 2009, sunspots were scarce, solar flares almostnon-existent, and solar EUV radiation was at a low ebb.

Still, the thermospheric collapse of 2008-2009 was not onlybigger than any previous collapse, it was also bigger than the sun's activityalone could explain.

To calculate the collapse, Emmert analyzed the decay ratesof more than 5,000 satellites orbitingabove Earth between 1967 and 2010. This provided a space-time sampling ofthermospheric density, temperature, and pressure covering almost the entireSpace Age.

Emmert suggests carbon dioxide (CO2) in the thermospheremight play a role in explaining the atmospheric collapse.

This gas acts as a coolant, shedding heat via infraredradiation. It is widely-known that CO2 levels have been increasing in Earth'satmosphere. Extra CO2 in the thermosphere could have magnified the coolingaction of solar minimum.

"But the numbers don't quite add up," Emmert said."Even when we take CO2 into account using our best understanding of how itoperates as a coolant, we cannot fully explain the thermosphere'scollapse."

The researchers hope further monitoring of the upperatmosphere will help them get to the bottom of the situation.