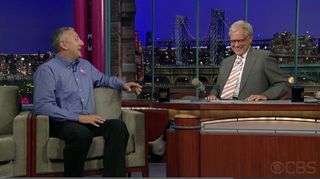 Lettermanquizzedveteran astronaut and Hubble Space Telescope repairman Mike Massiminoon"The Late Show with David Letterman" Wednesday in a show that camejust over a month after his own brush with space. Letterman watchedNASA'sspace shuttleAtlantis launch from Florida on its last planned mission inmid-May.

WithNASA's spaceshuttle set to retire in February and the future of NASA'smannedspaceflight in flux, Letterman asked Massimino what the future holdsforAmerica's space program.

"Forkidsinterested in becoming an astronaut, will there be a place for them tobeastronauts now?" he asked.

"Ithinkso," Massimino said. "I just can't imagine us stopping, there's noway that the country is going to let us stop exploring."

Lettermanalsowanted to know what Earth looked like from space.

"Atthe Hubblealtitude, you can see the planet in its entirety ? its curvature ? andit lookslike a big ball," Massimino told Letterman. "The thought that wentthrough my head was, 'This is something I'm not supposed to look at,it's asecret, people aren?t supposed to see this.'" [Viewsof Earth from space.]

Massiminovisitedthe space telescope in May 2009 as part of the fifth and finalservicing mission to the orbiting observatory. He hadrendered repairs andupgrades to Hubble back in 2002, but that spacewalk had been allbusiness.

Sowhen he got thechance to return to Hubble last May, he made sure to savor the moment."Mysecond spacewalk, I really had a chance to soak it in, and when I firstlooked [atEarth] I almost couldn?t stand to look . . . there are no words todescribethis beauty," the astronaut said.

Lettermansharedhis own notion of what spacewalking and a Hubble repair job might belike.

"Twoyearsago, I was building a tree house," Letterman said. "And periodicallyI would be, you know, hanging ? I would get my lip caught on a nail ?and Iwould think to myself this must be what it's like crawling around [inspace]."

Infurther relatinghis experience, Letterman said that in such a situation "every bit ofmuscle memory [is] gone" and "doesn?t apply when you?re outthere floating and working."

FootageofMassimino in action as well as scenes from other trips to the telescopeand thegroundbreaking discoveries this work helped to bring about wererecentlycompiled in a Hubble IMAX movie released in March.

Massiminosaid hehad to keep himself from being overcome by the splendor of this rarestofviews, and he joked with Letterman about the reason why.

"Istarted toget a little emotional, you know, and I got to catch myself, Dave,because Iwas afraid I might start to tear up," Massimino said, "and if I getsome water in my spacesuit it could cause a problem, and then there'dbe aninvestigation and I'd have to admit that I was crying."

Whilegrowing up onLong Island, Massimino said it was the original moon landing in 1969thatinspired him to one day aim for the astronaut corps. "I was six goingon seven? and when I saw people walk on the moon ? that really grabbed me," hesaid.

"You'reverylucky," Letterman said, "because you work in an industry that's acombination of engineering and physics and something that is also veryspiritual."

Massiminoagreed,saying that "people go to work at NASA because they love it" and witha "spirit of really [being] there for a purpose."

Forhim, as an aspiringastronaut, Massimino knew what it was he hoped to do someday. "Youtrainto do all this work, but the thing you really want to see, Dave, iswhat doesit look like up there? What do the stars look like? What does the Earthlooklike?"

Nowhaving obtainedthe visual answers, Massimino had this to say in summary about ourplanet, tocheers from the audience: "It's fragile, it's beautiful, it'sperfectionand we need to take care of it."