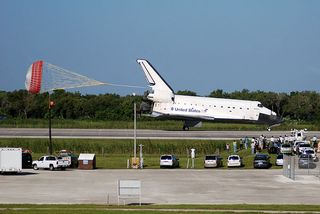 NASA'sspace shuttle fleet will continue flying through at least early next year dueto delays with the agency's final two missions.

Spaceshuttle program managers officially decided Thursday to delay the launch ofNASA's next space shuttle mission to Nov. 1 and push back the last scheduledflight to late February 2011.

Themove was not unexpected ? the space agency said in late June it was hoping to postpone the finalshuttle flightsbecause of cargo delivery and schedule conflicts. Both missions are bound forthe International Space Station.

Discovery'sSTS-133 mission is the orbiter's last scheduled flight and will deliver ashuttle cargo pod refitted to serve as a permanent storage closet for the spacestation. The shuttle will also deliver Robonaut 2, a prototype robot designedto assist astronauts working in space.

Delayspreparing Discovery's cargo for launch forced mission managers to push thelaunch date back. That shift forced another delay with NASA's final space shuttlemissionon the schedule ? the launch of Endeavour to deliver a $1.5 billionastrophysics experiment to the space station.

Endeavouris NASA's youngest space shuttle and was slated to launch its experimentpayload, called the Alpha Magnetic Spectrometer, no earlier than Nov. 27. Butbecause Discovery's flight is delayed, so too is Endeavour's STS-134 mission.

Areport issued in March by NASA's Office of the Inspector General also predictedthat the space agency would have to fly some if its finalshuttle missions in 2011.

NASAtypically spends about $200 million a month to keep its space shuttle fleetflying, though agency officials have said they have enough funding in place tosupport operations through February 2011.

NASAis still waiting to hear from the White House if the space shuttle Atlantis ?the current middle child of the U.S. orbiter fleet ? will get a chance fly onemore mission.

Atlantisflew its 32nd and final scheduled mission in May to deliver a new Russian roomto the International Space Station. NASA is hoping to get a chance to launchthe shuttle one more time in June 2011 to deliver cargo and supplies to theorbiting lab. [Photos: Last Launchof Shuttle Atlantis]

Butto give Atlantis one extra shuttle flight, NASA needs approvalfrom the White House, which it does not yet have, by August to begin planningthe mission.

NASAis retiring its space shuttle fleet after 30 years of service to make way forfuture programs aimed at sending astronauts to visit an asteroid by 2025, thentarget missions to Mars.

Theplan is part of President Obama's new space exploration proposal, whichalso includes the cancellation of NASA's Constellation program developing newrockets and spaceships slated to send astronauts back to the moon.

Oncethe space shuttles retire for good, NASA will rely on Russia's Soyuz spacecraftto ferry astronauts to and from the space station until American commercialspaceships become available.