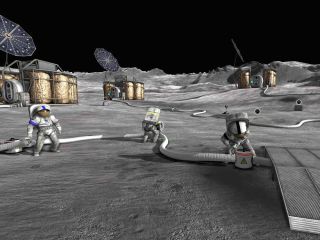 NASA's "Moonbase Alpha" allows up to six players to cooperate in saving a virtual lunar base from catastrophe.
(Image: © NASA/Virtual Heroes/America's Army)

NASAmay not be sending astronauts back to the moon anytime this decade, but thespace agency hopes to give virtual explorers a sense of what life on the moonwould be like in a new computer game launching this month.

Thegame, "Moonbase Alpha," will allow players to work together in afuturistic lunar base. It will be available for PC download from Valve's Steamnetwork on July 6. Players must tackle the challenge of restoring oxygen flowand critical systems after a meteor strike cripples a solar array and lifesupport system.

Thiscomes as a precursor to NASA's massively multiplayer online game, called"Astronaut: Moon, Mars & Beyond," where players would take onastronaut roles, such as a roboticist, and explore virtual versionsof the moon and other extraterrestrial locations. [Video:Moonbase Alpha trailer]

NASA and the game developers had debated about whether to keep the "MoonbaseAlpha" setting on a lunar base, after the cancellation of NASA'sConstellation Program that aimed to return astronauts to the moon. But they eventually decided to forge ahead with their original plans.

Agame of their own

Consider:If paying $200,000 for a real-life suborbital spaceflight on a Virgin Galacticspace liner sounds like a hefty price, that ticket price still falls short ofthe $330,000 one gamer spent to buy a virtual space station in the online game"Entropia Universe."

Thecompany behind "Entropia Universe" has since created a demo for theEuropean Space Agency (ESA) to show how online gaming could promote spaceexploration.

Thedevelopers at MindArk used their "Entropia Universe" game engine tocreate a virtual base set on Jupiter'smoon Europa. Their scripted demo shows players cooperating on in-gamemissions, such as repairing a broken-down rover

"[ESA]was expecting a mock-up, but not a prototype," said Christian Bjorkman,chief marketing officer for MindArk. "But for us to create themock-up, we might as well create the environment and run around in it."

ButJoachim Fuchs, a technical officer and system modeler at ESA, had also seenexamples of engineers holding collaborative work sessions in online games. Hewondered if an online game could not only promote space exploration amonggamers, but also allow engineers to play out scenarios for future spacemissions.

"Thenext generation of engineers we're going to get in this agency is going to havegrown up in a world dominated by [gaming] technologies and socialnetworks," Fuchs told SPACE.com.

Massivelymultiplayer online games have attracted millions of players worldwide who arewilling to pay about $15 per month to run around a virtual world with thousandsof other people. Researchers have even looked into using popular games such as"Worldof Warcraft" to encourage group learning among students.

Thatdoesn't mean NASA and ESA can simply cram knowledge down the throats of gamers.Successful online games provide players with entertainment first and foremost ?a fact that both the U.S. and European space agencies have recognized.

NASAhas recruited the help of game developers such as Virtual Heroes, which createdthe free online game "America's Army" for the U.S. Department ofDefense. The U.S. Army has dubbed the game its single most effectiverecruitment tool for reaching out to young people.

"America'sArmy" works because most of it feels like any other action-oriented, shoot-'em-upgame. Yet it also immerses players in virtual Army training, such aslearning how to use different weapons on the firing ranges, or diagnosing andtreating virtual wounded soldiers.

Gamesthat advertise their intent to educate players and promote learning have faredless well, according to the MindArk developers. They also emphasized the needto create a self-sustaining, profitable game that players would want to keepplaying.

"Theabsolute majority of these educational games have been a failure in terms ofattracting the interest and keeping it among the kids," Bjorkmanexplained. "This means that the fundamental criteria should always be tohave an entertainment base in which learning factors are built upon and addedto."

ESAconsidered many software and game developers to examine the idea of an onlinegame, but ultimately chose MindArk based on its success with "EntropiaUniverse." The commercial game allows players to pay real money for betterin-game guns or equipment, but players can also earn virtual game currency andthen cash out for real money.

MindArkalready offers commercial partners the choice of adding on new planets to"Entropia Universe," making it easy to put together the Europa basedemo.

"Inthe ESA study our game developers could put together the prototype environmentin a short time and publish the finished 'game' for ESA to access and evaluate;it is actually still online," Bjorkman said.

Thestudy suggested several game development scenarios for an ESA-themed game,depending on the space agency's goals. An online game with fewer players couldrepresent a more suitable choice for exploratory learning. Another game couldreach out to more casual players through social media, but at the expense ofeducation.

ESAhas yet to decide on a full-fledged game, and has not signed any developers on.But both ESA and MindArk representatives were enthusiastic about thepossibility of pushing forward.

"Increasingthe awareness and knowledge about space are issues far too important NOT to beplayed out in a game," the ESA study concludes.