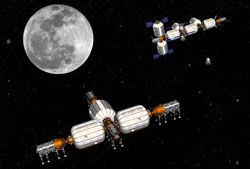 Two Russian cosmonauts have begun a spacewalk outside the International Space Station today to do some maintenance work and set up for scientific experiments.

Fyodor Yurchikhin, a veteran of four previous spacewalks, and Oleg Skripochka, who is making his first trip outside a spacecraft, floated outside the orbiting laboratoryaround 10:00 a.m. EST (1500 GMT) for a roughly six-hour spacewalk. They were about half an hour late getting started.

The spaceflyers will install a multipurpose workstation on the starboard side of the station's Russian Zvezda service module. They will also perform a grab-bag of minor tasks, including cleaning the thermal insulation around the vents of an oxygen-generation system, and relocating a television camera from one end of the Rassvet docking compartment to the other. [Graphic: The International Space Station Inside and Out]

The pair will also clean and remove a robotics experiment known as Kontur (a Russian project that stands for Development of a System of Supervisory Control Over the Internet of the Robotic Manipulator in the Russian Segment of ISS), from the port side of the Zvezda module into the Pirs airlock.

Finally, they will install a new materials experiment on a handrail on the station's Rassvet module, and collect samples from the exterior of Zvezda and Pirs to be analyzed later to study how the space environment affects the materials.

The spacewalkers are two of six crewmembers living onboard the space stationnow as part of the Expedition 25 mission. NASA astronaut Doug Wheelock is commanding the mission, while Skripochka, Yurchikhin, cosmonaut Alexander Kaleri and NASA astronauts Shannon Walker and Scott Kelly are serving as flight engineers. [Gallery: Building the International Space Station]

While the two cosmonauts are outside today, their four colleagues will be inside the two Russian Soyuz spacecraft currently docked at the station, so they are prepared to evacuate in case of an emergency. The measure is a safety precaution for every Russian spacewalk and the chances of an actual emergency are very unlikely, NASA officials said.