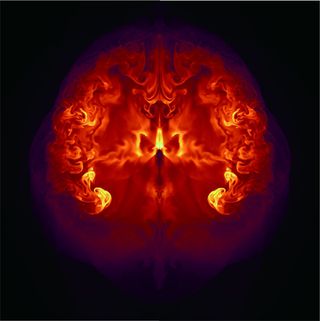 This visualization of a supernova explosion shows a cross-section of the simulated density distribution ten seconds after the off-center ignition. When seen from different viewing angles, a putative observer would see different gas densities and composition, which correspond to the diversity in observed supernovae.
(Image: © F. Roepke, MPA Garching)

The death of a star in a supernova explosion can brieflyoutshine an entire galaxy in cosmic conflagrations that many astronomersthought exploded with some symmetry. But new observations suggest supernovascan be unbalanced, beginning on one side of the star to create oddballexplosions.

Depending on the angle that astronomers viewa supernova, it will look somewhat different, like two faces of the samecoin, researchers said.

The discovery helps solve a mystery about a certain type ofsupernova called Type 1a. These explosions are thought to be very uniform, andare prized by astronomers for that quality.

However, observers noticed two subcategories of these supernovasthat behave differently over time, with some spewing out material very quickly whileothers exploded with comparative leisure. Now it appears the two subcategoriesare actually the same thing, seen from different angles.

According to the new study, whether a supernova appears tobe exploding rapidly or slowly just depends on which side is facing us.

"Now we show this diversity in appearance is simply aconsequence of this orientation," said lead researcher Keiichi Maeda ofthe University of Tokyo in Japan. "Now it means that these two categoriesare not really two populations."

The researchers resolved the two-faced nature of these supernovasby observing a group of them years after their explosions peaked. At thispoint, the dying stars had expelled much of their material in a translucentcloud of debris that telescopes can peer through to see into the heart of theaging supernova.

By studying the distribution and relative speed of thedebris, the astronomers could deduce the original directionof the explosion.

The finding also helps astronomers understand the complicated mechanics at theheart of these stellar explosions. For one thing, models that depict supernovasas spherical explosions should be replaced with asymmetric depictions.

"This is kind of a paradigm change in the study of Type1a supernovae," Maeda told SPACE.com.

Maeda and his team detail their findings in the July 1 issueof the journal Nature.

The finding has important ramifications for observers,because it reaffirms the usefulness of Type 1a supernovas as a cosmic distanceindicator, or so-called standard candle.

"The requirement for a good standard candle is thatthey look basically the same in every observed characteristic," Maedasaid.

All Type 1a supernovas shine at roughly the same peakbrightness - about 10^36 watts. That's because all they begin when a smallstar, called a white dwarf, sucks up mass from a companion star.

White dwarfs have a set limit to how massive they can becomebefore they explode, so when they do finally hit the limit, the explosionsalways blast out roughly the same amount of energy.

If one of these explosions appears brighter than another, itmust be because it is closer to us. So by measuring how bright a Type 1asupernova appears, and comparing that with its known actual, intrinsicbrightness, astronomers can calculate how far away it is.

So the idea that they might not actually be as uniform as wethought would put many distance calculations into question, including some ofthe fundamental calculations on the rate the universeis expanding that use Type 1a supernovas.

"Even a small systematic difference in their luminositywould potentially jeopardize the usefulness of Type 1a supernova as precisiondistance indicators," wrote astronomer Daniel Kasen of the University ofCalifornia, Berkeley, in an accompanying essay in the same issue of Nature.Kasen was not involved in the new research.