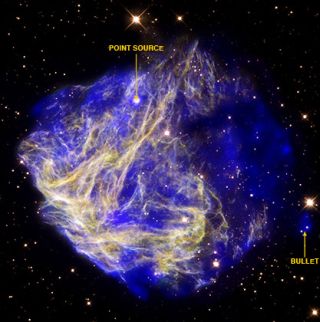 This annotated image from the Chandra X-Ray Observatory shows N49, the aftermath of a supernova in the Large Magellanic Cloud, and a bullet-like object ejected from the huge star explosion. Full Story.
(Image: © NASA/CXC/Penn State/S.Park et al)

A bullet-shaped object can be seen rocketing out of the hugeexplosion from a dying star in a new image taken by a powerful X-ray spacetelescope.

The new image from NASA's Chandra X-ray Observatory showsN49, the aftermath of a supernova explosion in the Large Magellanic Cloud, adwarf galaxy that neighbors our own Milky Way.

The cosmic bullet in the scene was caught when astronomersused Chandra for over 30 hours to get a long exposure. [Gallery- The X-ray Universe.]

The bullet, which suggests a highly asymmetric explosion, istraveling at a high speed of about 5 million mph (8 million kph) away from abright point source in the upper left part of N49. This bright source may be aso-called softgamma-ray repeater (SGR), a source that emits bursts of gamma-rays andX-rays.

A leading explanation for these objects is that they areneutron stars with extremely powerful magnetic fields. Since neutron stars areoften created in supernova explosions, an association between SGRs and supernovaremnants is not unexpected.

This case is strengthened by the apparent alignment betweenthe bullet?s path and the bright X-ray source.

However, the new Chandraobservations also show that the bright source is more obscured by gas thanexpected if it really lies inside the supernova remnant. In other words, it ispossible that the bright X-ray source actually lies beyond the remnant and isprojected along the line of sight.

Another possible bullet is located on the opposite side ofthe remnant, but it is harder to see in the image because it overlaps with thebright emission from the shock-cloud interaction ? the yellow and purple partsof the image (from Hubble Space Telescope data). These regions are brightfilaments where the shock wave generated by the supernova is interacting withthe densest regions in nearby clouds of cool, molecular gas.

The new Chandra photo suggests that the age of N49 ? as itappears in the image ? is about 5,000 years old, and the energy of theexplosion is estimated to be about twice that of an average supernova.

These preliminary results suggest that the originalexplosion was caused by the collapse of a massive star.

The research and new Chandra image were presented at the216th meeting of the American Astronomical Society in Miami, Fla.