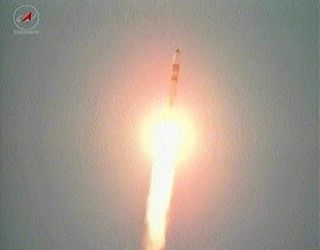 The Soyuz rocket soared into space at 11:35 a.m. EDT(1535 GMT) from the Central Asian spaceport of Baikonur Cosmodrome inKazakhstan carrying the unmanned Progress 38 cargo ship toward the space station.The robotic space freighter will dock at the station on Friday.

"Progress 38, on its way to the International SpaceStation," said a NASA mission commentator after the flawless launch.

About 213 pounds (97 kg) of the delivery ship's cargo isearmarked as items for the station crew. Astronauts always look forward tofresh fruit and other foods that arrive on Progress spacecraft, NASA officialshave said.

Some personal treats for the station astronauts aresometimes included, but NASA officials kept mum on anything unique riding onProgress 38.

"Anything that would be of interest is probably asurprise," NASA spokesperson Kelly Humphries told SPACE.com from the JohnsonSpace Center in Houston.

Progress 38 is scheduled to dock at the InternationalSpace Station on Friday at 12:58 p.m. EDT (1658 GMT). The cargo ship will parkat an aft docking port on the station's Russian-built Zvezda module.

Earlier this week, the station crew moved one of its two Soyuzspacecraft from the Zvezda docking port to a different parking spot toclear the berth for the incoming cargo ship.

Russia's disposable Progress spacecraft are similar inappearance to the three-module Soyuzspace taxis that ferry crews to and from the space station.

Both vehicles have a propulsion and orbital module,however Progress vehicles do not have a crew-carrying module like the Soyuzships. Instead, Progress vehicles are equipped with a propellant module tostore fuel for the space station's maneuvering thrusters.