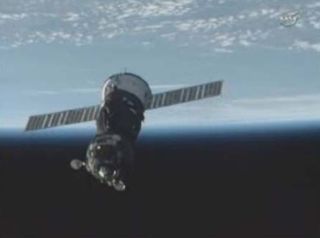 A Russian Soyuz TMA-19 spacecraft is seen moving between docking ports outside the International Space Station with the bright blue limb of the Earth as a backdrop on June 28, 2010 during the Expedition 24 mission. Full Story.
(Image: © NASA TV)

But while the flight went according to plan, itsbeginning did not.

A circuit breaker power failure one of the spacestation's wing-like solar arrays prevented NASA's Mission Control from latchingthe wing in the proper orientation for the Soyuz move. NASA typically positionsthe station's expansive solar wings to avoid any damage from thruster plumeswhen other spacecraft fly near the orbiting lab.

Mission Control solved the malfunction, but not in timefor an on time undocking. Yurchikhin and his two American crewmates ? NASA astronautsDouglas Wheelock and Shannon Walker ? had to spend an extra orbit linked to thestation's rear docking port on its Russian Zvezda module.

Russian mission controllers told the Soyuz crew to getcomfortable, even take off their Sokolspacesuit gloves if they felt like it. But Yurchikhin said they could waitit out.

After the initial delay, Yurchikhin undocked is Soyuzship at 3:13 p.m. EDT (1913 GMT) and redocked it to the new docking port on theRassvet module at 3:38 p.m. EDT (1938 GMT). External cameras on the space station'sexterior beamed stunning views of the Soyuz back to Earth.

Russia's Soyuz crew capsules and unmanned Progress cargo shipsare designed to make autonomous link ups at the space station's Russian-built dockingports, but the Rassvet module does not yet have all the electrical and cablehookups to allow hands-off rendezvous. That equipment will be installed duringa July 26 spacewalk by Russian cosmonauts, NASA officials said.

Yurchikhin said before this spaceflight that he was verymuch looking forward to flying the Soyuz TMA-19 himself.

"Manual dockings are a very interesting task for us,"he told SPACE.com before he launchedto the space station on June 15. Yurchikhin, Wheelock and Walker are livingaboard the space station alongside Russian cosmonauts Alexander Skvortkov,Mikhail Kornienko and American astronaut Tracy Caldwell Dyson. The six-personspace crew makes up the station's Expedition 24 mission.

Yurchikhin was also excited that his Soyuz is the firstto park at the Rassvet module, which is attached to the station's Russian Zaryacontrol module. The new space room, also known as the Mini-Research Module 1,was built by Russia to serve as both a research room and a docking port, andarrived on NASA's space shuttle Atlantis in May.

The Soyuz docking port swap clears the way for anotherspacecraft headed for the space station.

On Wednesday, a Russian Soyuz rocket is set to launch thenew Progress 38 cargo ship to the orbiting lab to deliver about 2.5 tons ofcargo for the station's six-person crew. The cargo ship is due to dock at the aftend of the space station's Zvezda module on Friday.