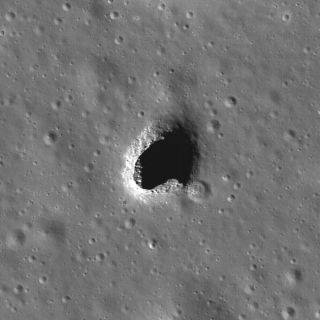 New photos of the moon have revealed the most detailed viewsyet of a rare hole in the lunar surface — a pit large enough to swallow anentire football field whole.

"Only three have been discovered thus far, so I believeit is safe to state that skylights (pits) are rare at the 100-meterscale," Mark Robinson, principal investigator for the Lunar ReconnaissanceOrbiter Camera (LROC) at Arizona State University, told SPACE.com in an e-mail.

Mare Ingenii, also called the "sea of cleverness,"is best known for its prominent lunar swirls, which are highly reflectivesurface features that are associated with magneticanomalies. The new images of the region from LROC show a giant pitmeasuring about 427 feet (130 meters) in diameter.?

The boulders and debris resting on the floor of the cavityare partially illuminated and likely originated at the surface, falling throughthe pit opening during its collapse. The hole is thought to be the result of apartially collapsed lava tube.

A similar moon pit, which was believed to be a skylight intoa lava tube, was previously discovered by the Kaguya mission in the MariusHills region of the moon. The new pit in Mare Ingenii, however, lacks thenumerous volcanic features that were found in the Marius Hills region.

"The existence of lava tubes and thus skylights hadlong been postulated," Robinson said. "However it is a surprise to mehow large and beautifully preserved are the three that we have seen thusfar."

Closer examination of Mare Ingenii could help scientistsunderstand the differences between the two areas of the lunar surface, and suchdiscoveries could also spur on furtherexploration of the moon, said Robinson.

"Imagine how fantastic it would be to land in one ofthese skylights and explore underground on the moon!" he said.