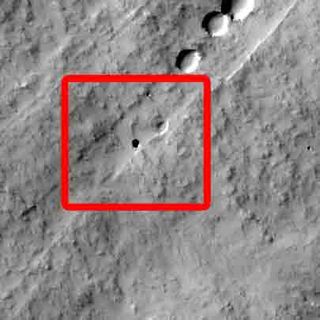 California 7th graders discovered this Martian pit feature at the center of the superimposed red square in this image while participating in a program that enables students to use the camera on NASA's Mars Odyssey orbiter. The feature, on the slope of an equatorial volcano named Pavonis Mons, appears to be a skylight in an underground lava tube. Full Story.
(Image: © NASA/JPL-Caltech/ASU)

A group of seventh-graders inCalifornia has discovered a mysterious cave on Mars as part of a research project to study images taken bya NASA spacecraft orbiting the red planet.

The 16 students from teacherDennis Mitchell's 7th-grade science class at Evergreen Middle School inCottonwood, Calif., found what looks to be a Martian skylight — a hole inthe roof of a cave on Mars.

The intrepid students wereparticipating in the Mars Student Imaging Program at the Mars Space FlightFacility at Arizona State University. The program allows students to frame aresearch question and then commission a Mars-orbiting camera to take an imageto answer their question.

The newfound holeon Mars resembled features seen on other parts of Mars in a 2007 study byGlen Cushing, a U.S. Geological Survey scientist.

Cushing suggested that theseanomalous pit cratersare like skylights — places where a small part of the roof of a cave or alava tube had collapsed, opening the area below the surface to the sky.

The caves are thought toresult from volcanic activity on the red planet. At some point lava channelslikely carved out caverns in the rock, and then left behind tunnel, or"lava tubes," when the eruptions were over. They would have beencovered when a solid ceiling of cooled material settled on top, and then sectionsof the ceiling likely collapsed at some point to form the skylight entrances.

Scientists aren't sure whattype of materials or deposits could be stored inside.

"This pit is certainlynew to us," Cushing told the students. "And it is only the second oneknown to be associated with Pavonis Mons."

The young researchers hadinitially set out to hunt for lava tubes, a common volcanic feature on Earthand Mars.

"The students developeda research project focused on finding the most common locations of lava tubeson Mars," Mitchell said. "Do they occur most often near the summit ofa volcano, on its flanks, or the plains surrounding it?"

The class commissioned a mainphoto and a backup image of Mars' Pavonis Monsvolcano, targeted on a region that hadn't been imaged up close.

The pictures were taken by NASA'sMars Odyssey orbiter using its Thermal Emission Imaging System (THEMIS)instrument. Both images showed lava tubes, as the students had hoped.

But the backup photo providedanother surprise: a small, round black spot. It was a hole on Mars leading intothe buried cave, researchers said.

The students have submittedtheir site to be further imaged by the High Resolution Imaging ScienceExperiment (HiRISE) camera on NASA's Mars Reconnaissance Orbiter, which couldreveal enough detail to see inside the hole in the ground.

"The Mars StudentImaging Program is certainly one of the greatest educational programs everdeveloped," Mitchell said.  "It gives the students a good understandingof the way research is conducted and how that research can be important for thescientific community. This has been a wonderful experience."