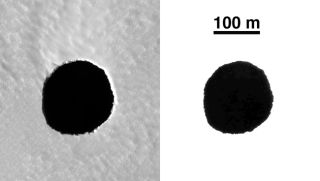 This feature on Mars is a candidate cavern entrance. It is northeast of Arsia Mons, one of the four giant Tharsis volcanoes on the red planet.
(Image: © NASA/JPL/University of Arizona)

A very dark spot on Mars could be an entrance to a deep hole or cavern, according to scientists studying imagery taken by NASA’s Mars Reconnaissance Orbiter.

The geological oddity measures some 330 feet (100 meters) across and is located on an otherwise bright dusty lava plain to the northeast of Arsia Mons, one of the four giant Tharsis volcanoes on the red planet.

The hole might be the sort of place that could support life or serve as a habitat for future astronauts, researchers speculated.

The Mars Reconnaissance Orbiter (MRO) used its High Resolution Imaging Science Experiment (HiRISE) instrument to draw a bead on the apparent deep hole — a feature that may cause more scientists to ponder about potential subsurface biology on Mars.

Because the spot lacks a raised rim or tossed out material called ejecta, researchers have ruled out the pit being an impact crater. No walls or other details can be seen inside the hole, and so any possible walls might be perfectly vertical and extremely dark or — more likely — overhanging.

HiRISE image specialists said the pit must be very deep to prevent detection of the floor from natural daylight, which is quite bright on Mars.

In April, it was announced that the NASA Mars Odyssey and its Thermal Emission Imaging System (THEMIS) found near the equator seven dark spots that scientists think could be entrances to underground caves.

Meanwhile, MRO is ready to target the dark spots on Mars over the coming months as opportunities arise, explained HiRISE principal investigator, Alfred McEwen, of the University of Arizona in Tucson.

“We especially want oblique images from the west, to see illuminated walls. These are deep holes with overhanging walls, but perhaps not long caves,” McEwen told SPACE.com.

Caves on Mars gives rise to thinking about subsurface life on the planet, notes Peter Smith, principal investigator for NASA’s next outbound mission to that distant and dusty world, the Phoenix lander. The deeper and deeper you go down on Mars, the warmer and warmer it gets, Smith said, and at some point the conditions are just right where liquid water is stable.

Moreover, could caves be linked to underground fractures allowing water vapor to be trapped inside, Smith speculates, perhaps the sort of comfy environment ideal for biology.

Smith said caves on Mars are an exciting find. “We can’t say what’s in the caves. It’s just that they exist. It is hard to tell from orbit. Landers can follow up on these discoveries."

Penny Boston, director of cave and karst studies at New Mexico Tech in Socorro, New Mexico, has been working on a Caves of Mars Project, funded by the NASA Institute for Advanced Concepts.

Not only are natural caves of biological interest, Boston says, they could also serve as habitats for future human explorers — nifty underground housing to protect against the high-radiation environment of Mars. Additionally, caves offer easier subsurface access for direct exploration and drilling, she suggests, and may provide extractable minerals, gases, and ices.