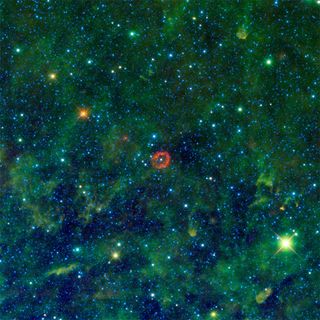 What looks like a jellyfish floating in a sea of kelp is actually a cloud of material shed by a massive star, in this new image from WISE. Full story Image
(Image: © NASA/JPL-Caltech/UCLA)

A new photo a star shedding its gassy layers bears astriking resemblance to a red jellyfish floating in a sea of green kelp.

The jellyfish-star photo depicts a sphere of stellarinnards, blown out from a humongous star as it ages. The star (white dot incenter of red ring) is one of the most massive stellar residents of our MilkyWay galaxy.

Called V385 Carinae, the star spotted by WISE is 35 times asmassive as our sun, with a diameter nearly 18 times as large. It's hotter, too,and shines with more than one million times the amount of light.

Objects like this are called Wolf-Rayetstars, after the astronomers who found the first few, and make our sun lookpuny by comparison. These fiery candles burn out quickly, leading short livesof only a few million years (our sun is middle-aged and about 4.6 billion yearsold).

As they age, Wolf-Rayet stars blow out more and more of theheavier atoms cooking inside them ? atoms such as oxygen that are needed forlife as we know it.

The material is puffed out into clouds like the one thatglows brightly in the new image. In this case, the hollow sphere showed upprominently only at the longest of four infrared wavelengths detected by WISE.

Astronomers think this infrared light comes from oxygenatoms that have been stripped of some of their electrons by ultravioletradiation from the star. When the electrons join up again with the oxygenatoms, light is produced that WISE can detect with its 22-micron infrared lightdetector.

The process is similar to what happens in fluorescent lightbulbs.

Infrared light in one wavelength is colored green, whilelight in another range is blue. The green, kelp-looking material is warm dust,and the blue dots are stars in our MilkyWay galaxy.

This image mosaic is made up of about 300 overlappingframes, taken as WISE continues its survey of the entire sky.

V385 Carinae is located in the Carina constellation, about16,000 light-years from Earth.