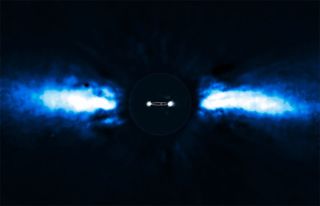 Photo of the reflected light on the dust disc around the star Beta Pictoris. In the center a gas giant planet is visible, with the planet's possible orbit indicated. Full Story
(Image: © ESO/A.-M. Lagrange)

Astronomers have directly imaged an alien planet as it orbits around its very young star. The discovery helps prove that gas giant planets like this one can form very rapidly, the researchers said.

The planet belongs to a star called Beta Pictoris, located about 60 light-years from Earth toward the constellation of Pictor. This star is about 75 percent more massive than our sun, but is only 12 million years old, making it less than three-thousandths of the age of the sun.

That means that its planet must have formed in even less time ? just a blip on the screen, cosmically speaking.

"According to theory we think giant planets can form in a few million years," said researcher Gael Chauvin of the Universit? Joseph Fourier in Grenoble, France. "This is a nice confirmation."

The new images confirm that the planet exists, and that it orbits closer to its star than any other exoplanet that's been directly photographed.

The planet, dubbed Beta Pictoris b, circles Beta Pictoris as close as eight times the distance from the Earth to the sun, or roughly the orbit of Saturn. This small separation allowed the astronomers to see its orbital motion as it moves from one side of its stellar host to the other.

The images were taken with the NAOS-CONICA instrument on one of the 8.2-meter Unit Telescopes of the European Southern Observatory's Very Large Telescope in Chile.

The star is so young that it still has a so-called circumstellar disk of dust and gas around it, from which planets are being formed. The gas giant's gravitational pull has caused a warp to form in this disk.

"For the first time we are really probing the birth of a planet inside the disk, which is really interesting," Chauvin told SPACE.com. [Photos - The Strangest Alien Planets.]

The discovery could help scientists get a better handle on how solar systems like our own are born and evolve over time. It seems that larger gas planets ? like Jupiter and Saturn in our own system ? form first in the circumstellar disk. A small rocky core amasses to start, and then it pulls gas onto it to form a planet.

Later, after most of the gas from the disk has been used up to form gas planets, the leftover dust collides and sticks together to build smaller rocky planets, like the Earth, Mars and other terrestrial planets in our solar system.

"We are pretty sure this is the way our solar system formed," Chauvin said.

The researchers, led by Anne-Marie Lagrange of the Universit? Joseph Fourier, detail their findings in the June 11 issue of the journal Science.