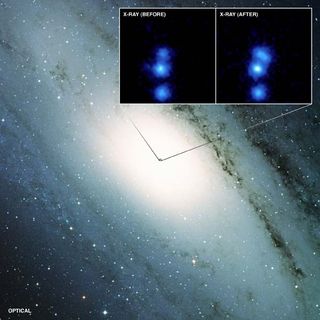 The large image here shows an optical view, with the Digitized Sky Survey, of the Andromeda Galaxy, otherwise known as M31. The inset shows Chandra images of a small region in the center of Andromeda. The image on the left shows a sum of Chandra images taken before January 2006 and the image on the right shows a sum of images taken after January 2006. Before 2006, three X-ray sources are clearly visible, including one faint source close to the center of the image. After 2006, a fourth source, called M31*, appears just below and to the right of the central source, produced by material falling onto the supermassive black hole in M31.
(Image: © X-ray (NASA/CXC/SAO/Li et al.), Optical (DSS))

MIAMI? Some strange behavior from two huge black holes at the center of twodifferent galaxies has been noticed by astronomers.

Onesupermassiveblack hole, at the heart of a galaxy neighboring the Milky Way, has beenmysteriously brightening in recent years, and scientists aren't sure why.Another of these matter-gobbling behemoths isn't where astronomers thought itwas located.

Twonew studies on these blackholes, the results of which were presented here today at the 216th meetingof the American Astronomical Society, have turned up some surprising results andcould help astronomers understand more about the evolution of galaxies and howsupermassive black holes work.

Inthe first study, the erratic, unpredictable behavior of the supermassive blackhole within the Andromeda galaxy puzzled researchers studying it. They foundthat the black hole became 100 times brighter following an outburst on Jan. 6,2006.

Afterthe outburst, however, the black hole entered another relatively dim state, butwas still about ten times brighter on average than prior to 2006. The outburstsuggests that a relatively high rate of matter had been falling onto the blackhole, followed by a smaller, but still significant rate.

"Wehave some ideas about what's happening right around the black hole inAndromeda, but the truth is we still don't really know the details," saidstudy member Christine Jones, of the Harvard-Smithsonian Center forAstrophysics (CfA) in Cambridge, Mass.

Thebrightening since 2006 could be caused by the black hole's capturing winds froman orbiting star, or by a gas cloud that spiraled into the black hole.

But,the original cause of the outburst remains unclear. The researchers believethat it could be due to the sudden release of energy, such as magnetic fieldsin a disk around the black hole that suddenly connect and become more powerful.

"It'simportant to figure out what's going on here because the accretion of matteronto these black holes is one of the most fundamental processes governing theevolution of galaxies,' said study team member Zhiyuan Li of CfA.

Theresults of this study imply that the feeble, but erratic behavior of the blackhole in the Milky Way could potentially be typical for present-day supermassiveblack holes.

"Theblack holes in both Andromeda and the Milky Way are incredibly feeble,"Zhiyuan Li said. "These two 'anti-quasars' provide special laboratoriesfor us to study some of the dimmest type of accretion even seen onto asupermassive black hole." (Quasars are the very active centers of galaxiesthough to surround the central supermassive black hole.)

Inanother unexpected finding, a separate study demonstrated that a supermassiveblack hole previously thought to lurk in the core of a relatively nearby giantgalaxy, called M87, is not actually located at the galaxy's center.

Researchersused data from the Hubble Space Telescope to look more closely at the blackhole, and found that the supermassive black hole in the M87 galaxy is, in fact,displaced from the center.

"Thetheoretical prediction is that when two black holes merge, the newly combinedblack hole receives a 'kick' due to the emission of gravitational waves, whichcan displace it from the center of the galaxy," said lead researcherDaniel Batcheldor of the Florida Institute of Technology.

"Wealso find, however, that the iconic M87 jet may have pushed the SMBH away fromthe galaxy center,? Batcheldor added.

M87,which is located 50 million light-years away, has an active jet that shootslight out of the galaxy's core. The core is made up of matter that swirlscloser to the black hole and approaches the speed of light, combining withtremendous magnetic fields in the process.

Thematerial that is ejected from this core area can help astronomers understandhow black holes attract and consume matter.

"Whatmay well be the most interesting thing about this work is the possibility thatwhat we found is a signpost of a black hole merger, which is of interest topeople looking for gravitational waves and for people modeling these systems asa demonstration that black holes really do merge," said study memberAndrew Robinson, ?of the Rochester Institute of Technology (RIT).

Itwas also discovered that this displacement often lasts for extended periods oftime, which could provide a valuable tool for astronomers hoping to understandhow galaxies form and grow.

"Oncekicked, a supermassive black hole can take millions or billions of years to returnto rest, especially at the center of a large, diffuse galaxy like M87," saidDavid Merritt, co-author of the study and a professor of physics at RIT. "Sosearching for displacements is an effective way to constrain the merger historyof galaxies."

Jets,such as the one in M87, are mostly found in a class of objects called ActiveGalactic Nuclei. Astronomers believe that supermassive black holes can becomeactive as a result of the mergerbetween two galaxies, the falling of material into the center of thegalaxy, and the subsequent merger of their respective black holes.

So,it is possible that these findings could also shed light on how active galaxies? including faraway, developing galaxies known as quasars, the most luminousobjects in the universe ? are born and how their jets are formed.

Aboutthree decades ago, M87 was one of the first galaxies suggested to harbor acentral black hole, but astronomers have since concluded that most large galaxies,including our own Milky Way, have supermassive black holes located at theircenters.

Theamount that they are offset, however, would be very subtle and researcherswould have to rely on observations from the Hubble Space Telescope (HST) inorder to detect them.

Inparticular, said Eric Perlman, one of the study?s researchers and an associateprofessor of physics and space sciences at Florida Tech, it is believed thatour own galaxy is expected to merge with the Andromeda galaxy in approximatelythree billion years.

"Theresult of that merger will likely be an active elliptical galaxy, similar toM87," Perlman said. "Both our galaxy and Andromeda have SMBHs intheir centers, so our result suggests that after the merger, the SMBH maywander in the galaxy's nucleus for billions of years."