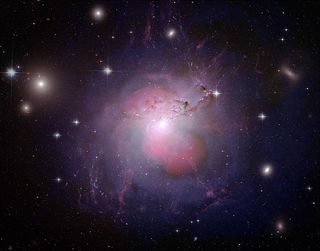 The image is a multi-wavelength image of the galaxy NGC 1275 which is a local equivalent to many of the distant massive galaxies studied by Asa Bluck and the other members of the Nottingham/University College London team. It shows the phenomenal power of supermassive Black Holes to rearrange the gas of a galaxy, and represents a window onto a violent past to the lives of galaxies.
(Image: © A. Fabian (Cambridge)/STScI/NASA)

Black holes might kill entire galaxies with blazing energy,dooming embryonic stars before they can get born and condemning the remainingstars to a slow death, scientists have found.

Although nothing can escape from a black hole, before matter fallsinto one, it swirls around to form a disk that heats up as it packs together,radiating energy.

Supermassiveblack holes are thought to reside at the center of almost every galaxy,with some growing to billions of times the mass of our sun. To see what impactthese monsters might have, researchers relied on data from the Hubble SpaceTelescope and the Chandra X-ray Observatory, looking for galaxies with veryhigh X-ray emissions, a classic signature of black holes devouring gas anddust.

The scientists discovered the accretion disks of super-massiveblack holes in at least one-third of all the massivegalaxies in the universe far outshines the combined output of the hundredsof billions of stars in their host galaxies at some point in their histories.This outpouring of energy is high enough to strip apart every massive galaxy inthe cosmos 25 times over, while the X-ray emission from them turns out to dwarfthat from every other source in the universe put together.

All this radiation can drive away the gas and dust that serve asthe raw ingredients of new stars, permanently shutting down star formation inthe surrounding galaxy. The remaining stars age, redden, die and are neverreplaced.

"We are left with a startling picture of the formationhistory of massive galaxies, where dramatic violence in the form of the torrentof radiation from matter falling into blackholes leads to the death of galaxies they inhabit," said researcherAsa Bluck, an astrophysicist at the University of Nottingham in England.

"Black holes form inside their host galaxies and grow inproportion to them, forming an accretion disc which will eventually destroy thehost," he added. "In this sense they can be described as viral innature."

Still, "massive galaxies are in the minority in our visibleuniverse," Bluck noted. "About one in a 1,000galaxies is thought to be massive, but it may be much less."

Many other galaxies "would be too small toharbor really massive super-massive black holes, so would be unlikely to havereally dramatic outpourings of radiation leading to the death of galaxies likewe see in many very massive galaxies," Bluck told SPACE.com."However, there is still likely to be some effect from this even in smallsystems."

When it comes to our own galaxy, "this is actuallyquite a big galaxy, but has an abnormally diminutive centralblack hole," Bluck noted. "Currently it is in a quiescent stage ?not outputting much energy ? but this could change in the future."

For instance, "we expect our own galaxy and Andromedato merge in about 4 billion years or so," Bluck explained. "If thisends up providing new gas reserves and channeling this gas to the center of ourgalaxy ? all big ifs ? then there is a real chance of triggering our dormantblack hole at some point in the distant future."

"But don't worry," he added, "our sun will havesputtered out by then anyway."

Asa and his colleagues detailed their findings at the RoyalAstronomical Society National Astronomy Meeting in Glasgow on April 16. Theywill submit their research to the Monthly Notices of the Royal AstronomicalSociety.