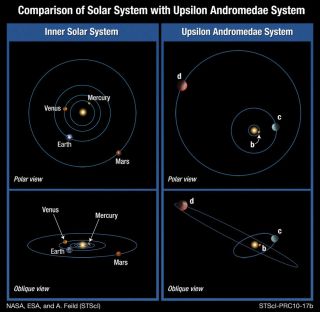 An artist's illustration that compares the solar system with the Upsilon Andromedae system. Astronomers have recently discovered that not all planets orbit the bright yellow-white star Upsilon Andromedae in the same plane, as the major planets in our solar system orbit the Sun. The orbits of two of the planets, c and d, are inclined by 30 degrees with respect to each other.
(Image: © NASA, ESA, and A. Feild (STScI) Science: NASA, ESA, and B. McArthur (The Univ. of Texas at Austin, McDonald Observ.))

MIAMI? The ability of life to thrive on alien worlds may be impacted by the wild andweird orbits of giant neighboring planets, new studies suggest.

Theheftier worlds in other planetary systems could exert large forces on smallerworlds, pushing and pulling them into changing orbits. In some cases, theseweird orbits could cause some extrasolarplanets to fluctuate between being habitable and being inhospitable to life.

Thesechanging conditions of habitability could impact the search for life on otherworlds and astronomers' theories on the formation of planetary systems like ourown.

"Thereis this crazy zooof planets out there that probably are habitable," research teammember Rory Barnes of the University of Washington said, "but theirproperties are very different from Earth and they're different from Earthbecause of their eccentric neighbors."

Theresults of the two studies that looked at these wild orbits were presented heretoday at the 216th meeting of the American Astronomical Society. [TheStrangest Alien Planets.]

Whenastronomers hunt for exoplanets, they look for signs of rocky, Earth-likeplanets in zones where conditions, such as temperature and liquid water, remainstable enough to potentially support life.

But,new findings from computer modeling indicate that the habitabilityof some exoplanets could vary, based on the orbits of giant planetaryneighbors.

Thediscovery of these so-called weird orbits will have important implications forexisting theories of how multi-planet systems evolve. The findings also show thatsome violent events can happen to disrupt planets' orbits after a planetarysystem forms.

"Thefindings mean that future studies of exoplanetary systems will be morecomplicated," said Barbara McArthur of The University of Texas at Austin, who was the lead researcher for one of the studies. "Astronomers can nolonger assume all planets orbit their parent star in a single plane."

McArthurand her team at the McDonald Observatory in Austin, Texas, discovered aplanetary system in which the orbits of two planets are at a steep angle toeach other.

Theresearchers used data from the Hubble Space Telescope, the Hobby-EberlyTelescope, and other ground-based telescopes combined with extensive modelingto unearth a slew of information about the planetary system surrounding thenearby star Upsilon Andromedae.

UpsilonAndromedae, a yellow-white dwarf star, is located about 44 light-years away,and is similar to our sun. It is, however, a bit younger, slightly moremassive, and shines a bit brighter than the sun.

Forover a decade, astronomers have known that three Jupiter-type planets orbitUpsilon Andromedae. McArthur's team was able to measure the exact mass of twoof the three known planets. But, the surprising result came when theresearchers observed that the two planets are inclined and orbit at a steepangle to one another. The team's results will also be detailed in the June 1edition of the Astrophysical Journal.

"Mostprobably Upsilon Andromedae had the same formation process as our own solarsystem, although there could have been differences in the late formation thatseeded this divergent evolution," McArthur said. "The premise ofplanetary evolution so far has been that planetary systems form in the disk andremain relatively co-planar, like our own system, but now we have measured asignificant angle between these planets that indicates this isn't always thecase."

Traditionally,it was understood that a big cloud of gas collapses down to form a star, andplanets are a natural byproduct. Leftover material forms a disk. In our solarsystem, there is a natural fossil of that creation event, because all of theeight major planets orbit in nearly the same plane.

Severaldifferent gravitational scenarios could potentially be responsible for theunexpected inclined orbits of planets in Upsilon Andromedae.

"Possibilitiesinclude interactions occurring from the inward migration of planets, theejection of other planets from the system through planet-planet scattering, ordisruption from the parent star's binary companion star, UpsilonAndromedae," McArthur said.

"Ourdynamical analysis shows that the inclined orbits probably resulted from theejection of an original member of the planetary system," Barnes said."However, we don't know if the distant stellar companion forced thatejection, or if the planetary system itself formed such that some originalplanets were ejected."

Headded that the revised configuration still lies on the precipice of stability,because "the planets pull on each other so strongly that they are almostable to throw each other out of the system."

Barnes'own research emphasizes the important role that planetary systems architecturehas on the potential habitability of exoplanets.

Alone terrestrial, or Earth-like, planet with a mostly circular orbit toward theinner edge of its sun's habitable zone would be expected to maintain that orbitand remain within that zone, said Barnes.

But,adding a planet to the system that is comparable in size to Jupiter, and givingit a highly elliptical orbit ? similar to most exoplanets discovered so far ?could cause strange things to happen to the smaller planet, possibly causing itto cycle between habitable and uninhabitable conditions.

Insuch cases, the smaller planet's orbit will elongate, taking it further beyondthe sun's habitable zone, before then trying to readjust to become morecircular again. These events occur all within a time period of only 1,000years, and could even happen repeatedly.

Thiscould mean that an exoplanet's average yearly temperature could changesignificantly during each millennium, altering conditions on the alien planet'ssurface in the process.

"Forpart of the time liquid water could exist on the surface, but at others itwould boil off," said Barnes, who also presented his findings at today'smeeting.

Theeffect would be similar for an Earth-like planet at the outer edge of itshabitable zone, except that the altered orbit would likely take it too far fromits sun, resulting in planetary glaciation for part of its orbital period.

"Thebigger issue here is that the habitable zone is very complicated," Barnessaid. "Earth's climate is affected slightly over tens of thousands ofyears by the orbits of other planets in the solar system, but it is possiblethat in many exoplanetary systems the layout of the planets is very importantto habitability."

Aplanet's habitable zone becomes even more complex for exoplanets that orbitlow-mass stars, such as stars that are one-third the mass of the sun. In suchsystems, the habitable zone is much closer to the smaller star, and any forcesfrom the star's gravity have critical effects in determining whether the planetis habitable.

Theaddition of a Jupiter-like planet with an eccentric orbit could change theorbit of the smaller planet, thereby also altering the conditions on the alienplanet.

"Therecould be planets out there that have their geological properties change oververy long timescales," Barnes said. "You can imagine planets thatcycle in and out of intense volcanism and earthquake stages."

Forceswithin a planetary system also fix the planet's rotation period. If a planet'sorbit becomes more elongated, the length of that planet's day could change alsochange significantly.

"Thelength of the day changes almost day to day," Barnes said. "It'sfascinating to think about how evolution occurs on such a world."