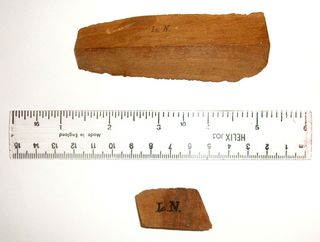 NASA astronaut Piers Sellers will take the larger of these two pieces of the apple tree credited by Isaac Newton has helping him discover the laws of motion that explain gravity during NASA's STS-132 shuttle mission to the International Space Station in May 2010. Full story.
(Image: © Royal Society)

A piece of the apple tree that helped British scientist Sir IsaacNewton explain the tug of Earth's gravity and laws of motion in the 17thcentury is about to escape that gravitational pull when it launches into spacethis week.

NASA astronaut Piers Sellers, who was born in England, iscarrying the historic piece of wood into space for The Royal Society in theUnited Kingdom. It is packed with the rest of his space luggage for Friday'splanned launchof the shuttle Atlantis toward the International Space Station.

"I am flying a chip of wood from Isaac Newton's appletree. How about that?" Sellers told SPACE.com in an interview last week."It's even got a little 17th century scrawl on it that says, 'I. Newton.'I don't know if he wrote it or someone else wrote it, but anyway, it's a veryold piece of apple tree."

The tale of Newton and the apple tree is a storied one amongspace scientists.According to science lore, Newton watched an apple fall from its tree in hisgarden, which gave him the inspiration for what became his theoryof gravity.

The original account appears in a 1752 biography of Newtonby author William Stukeley, who describes a conversation he had with Newtonthat included the story.

Newton is a former president of the Royal Society, which iscelebrating its 350th birthday this year. A portrait of Newton is also packedalong with the apple tree shard among Sellers' official flight luggage.

"I?m pretty sure that Sir Isaac would have loved to seethis, assuming he wasn?t space sick, as it would have proved his first law ofmotion to be correct," Sellers said in a statement.

Newton's first law of motion, one of three, states that anobject at rest will stay at rest unless acted upon by an outside force. It alsoholds for an object in motion, which would stay in motion unless also confrontedby an external force.

Newton's second law of motion describes the relationshipbetween an object's force and its mass and acceleration, while the third lawstates that for every action there is an equal and opposite reaction.

Once it returns to Earth aboard Atlantis, the apple treepiece will be returned to the Royal Society to be displayed in an exhibit.

Sellers will carry a postcard portrait of Newton along withthe apple tree piece during a planned 12-day mission to the International SpaceStation. Liftoff is set for 2:20 p.m. EDT (1820 GMT) Friday, May 14, fromNASA's Kennedy Space Center in Florida.

The mission is set to be the last spaceflight of Atlantisand will deliver a new Russian science module to the space station, along witha ton of supplies and some spare parts. Three spacewalks are planned.

NASA intends to retirethe shuttles by the end of the year. Two more shuttle flights remain afterthis one.