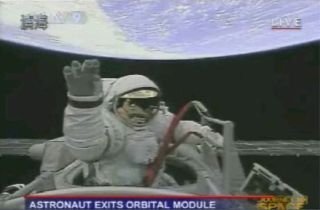 China has selected two military air transport pilots asits first female astronauts, the country?s state media reported Wednesday. Theonly hitch? The women had to be hitched ? as in married ? to make the cut.

"In the selection, we had almost the samerequirements on women candidates as those for men, but the only difference wasthat they must be married, as we believe married women would be more physicallyand psychologically mature," Xinhua quoted Zhang as saying during a breakat an annual parliamentary session.

The women are both pilots with the People's Liberation Army Air Force. They were selected alongside five men as China?ssecond class of astronauts as the country pushes forward with its mannedspaceflight program. The addition of seven new recruits boosts China?s totalastronaut corps to 21 spaceflyers.

China is the third country after Russia and the UnitedStates to build spacecraft capable of launching humans into orbit.

The country?s spaceship of choice is the Shenzhou(Chinese for "Divine Vessel"), a three-module vehicle derived fromRussia?s workhorse Soyuz craft. But unlike the Soyuz, the Shenzhou has anorbital module equipped with solar arrays, allowing it to stay in orbit long afterits crew returns to Earth.

China launched its first manned spaceflight ? the one-manShenzhou 5 flight ? in 2003. A two-man Shenzhou 6 mission followed in 2005,leading to a three-man Shenzhou 7 spaceflight in September 2008, which includedChina?sfirst spacewalk by astronaut Zhai Zhigang.

In 2011, China plans to launch Tiangong1 ? the first module of a new space station ? from the Jiuquan space centerin the Gobi desert.

The country is also planning to launch its second moonorbiter, called Chang?e 2, in October to search for potential landing sites forfuture robotic lunar probes. A third moon mission, Chang?e 3, is slated tolaunch in 2013, Xinhua quoted Ye Peiujian ? who designed the first moon probe(Chang?e 1) and is commanding the second mission ? as saying.

Chinese space officials have also said a new heavy-liftrocket, called Long March 5, is also in development and due to make a launchdebut in 2014. The new rocket should be capable of hauling up to 55,000 poundsof payload into low Earth orbit, they added.