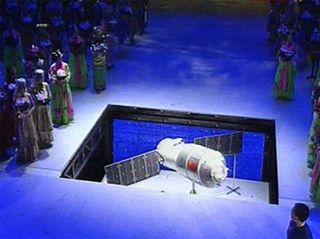 The space station design was unveiled on a live broadcast to celebrate the Chinese New Year.
(Image: © CCTV)

The leaders of China's human spaceflight endeavors say 2011is shaping up to be the most ambitious year in the history of the country'sspace program.

China plans to launchthe cornerstone of a new orbiting space laboratory some time in 2011. Weighingnearly 19,000 pounds, the Tiangong 1 module will be launched into orbit unmannedaboard a Long March 2F rocket from the Jiuquan space center in the Gobi desert,according to the state-run Xinhua news agency.

Beginning as early as late 2011, China will launch three Shenzhouspacecraft to rendezvous and dock with Tiangong1 in orbit. The first mission, named Shenzhou 8, will launch unmanned andapproach the module in China's first orbital docking attempt.

Within two years of Tiangong 1's launch, two more Shenzhouships will fly to the fledgling space station with Chinese astronauts aboard.The crewed flights will contain two or three astronauts each for temporaryvisits, according to Xinhua.

Chinese astronauts would conduct scientific experimentsaboard the complex, according to Xinhua.

Military observations and investigations will also be likelypayloads for the small space station.

China is preparing its secondmoon orbiter for launch in October of this year. The Chang'e 2 probe willcarry a high-resolution camera capable of spotting lunar surface features assmall as 3 feet.

Chang'e 2 will map potential landing sites for follow-onrobotic missions that will attempt to reach the moon's surface, another firstfor the Chinese space program. China has not set a date for Chang'e 3's lunarlanding mission.

Liang was also quoted by the Xinhua news agency.

The Long March 5 will be capable of placing up to 55,000pounds of payload into low Earth orbit, according to Chinese space officials.