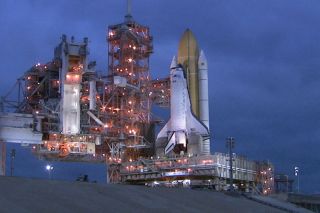 Discovery's astronauts boarded their spaceship at KennedySpace Center's Launch Pad 39A Friday as NASA stepped through a practicecountdown for the planned April 5 launch of the first of only four remainingInternational Space Station assembly-and-outfitting missions before shuttlefleet retirement late this year.

Mission commander Alan Poindexter led a crew of seven out of the Operations& Checkout Building in the KSC Industrial Area earlier this morning and allboarded NASA's silver "Astro-Van" for a 30-minutetrip out to the pad. The astronauts had donned full-pressure launch-and-entrysuits prior to departure for a launch-daydress rehearsal.

With 150 to 200 engineers staffing Firing Room 4 of the Launch Control Center,the astronauts and the launch team are marching through all the same countdownpreparations they will do on April 5, with one notable exception: the shuttle's15-story external tank is not fueled with more than a half-million-gallons of supercold liquid hydrogen and liquid oxygen.

Dutton, Metcalf-Lindenburger and Yamazaki all will bemaking their first flightinto space. Wilson is a veteran shuttle robot arm operator. Mastracchio is a veteran spacewalker and Anderson served along-duration tour on the station his first flight.

Bit of trivia: Anderson is the only astronaut ever to read down from space thenames of every town and hamlet in his home state of Nebraska.

Another: The commander's father, John Poindexter, was National Security Advisorin the Reagan Administration. First in his class in the U.S. Naval Academy in1958, John Poindexter graduated with former astronaut Bruce McCandless.McCandless is the subject in one of the most iconicpictures in the 30-year historyof the shuttle program, the astronaut flying the Manned Maneuvering Unitagainst the blackness of space.

The two-day practice countdown picked up early Thursday and concluded at 11a.m. with a simulated main engine shutdown at T-Minus 4 seconds.

The astronauts then performed an emergency drill. They practiced a rapid egressfrom the vehicle, cross the Orbiter Access Arm on the 195-foot level of thelaunch tower and then climb into the metal baskets that would whisk them down a1,200-foot slide-wire in an emergency.

They did not, however, hit the metal bar that would send their baskets scootingdown the slidewire at a top speed of about 55 mph toan emergency bunker on the western perimeter of the pad area.

The Terminal Countdown Demonstration Test is the last major training exerciseat KSC for shuttle crews prior to launch.

Publishedunder license from FLORIDA TODAY. Copyright ? 2010FLORIDA TODAY. No portion of this material may be reproduced in any waywithout the written consent of FLORIDATODAY.