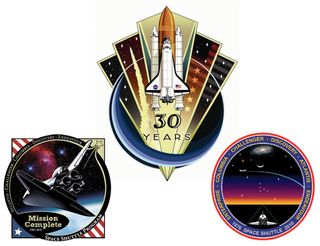 Alaunching space shuttle flanked by an American flag and stars hailing bothNASA's orbiter fleet and the astronauts whose lives were lostwhile flying aboard them has been chosen by the space agency as itsofficial insignia to mark the approaching retirement of the wingedspacecraft.

NASA revealed Monday thewinning design in its in-house space shuttle commemorative patchcontest, which began last October. The selected gem-shapedpatch, which was designed by Hamilton Sundstrand camera engineer BlakeDumesnil from Johnson Space Center in Houston, Texas, was chosen byjudges out of the 85 designs submitted by the agency's past and presentworkforce.

In announcing Dumesnil as the first place winner, NASA also named the judges'second and third choices.

Jennifer Franzo from the Michoud Assembly Facility, New Orleans,placed second with her "Mission Complete" logo, depicting theshuttle in orbit "tipping its wing to the world, as a way to say'thank you' and 'farewell' just as a cowboy would wave goodbye into thesunset."

Third place went to Tim Gagnon, a former subcontractor employee at KennedySpace Center, Florida, whose patch designs have been worn by theastronaut crews on shuttle and International Space Station flights. Hiscontest entry focused on the "orbiter coming home for a safelanding at the conclusion of its final mission."

In addition to being the judge's first pick, Dumesnil's patch also toppeda "People's Choice" poll that was held amongNASA employees in January. Out of the 7,606 total votes, Dumesnil'sdesign received 2,182, or 29% of the ballots.

As his prize, Dumesnil will be presented with his winning art that will beuplinked to the International Space Station and returned toEarth with Endeavour's STS-130 crew. His design will also appear onNASA documents and be used on souvenirs to be sold through NASA's employee stores.

A gem of an emblem

Dumesnil chose a diamond-shape for his patch to suggest how the shuttlehas been "an innovative, iconic gem in the history of American spaceflight,"its facets fanning out to "evoke the vastness of space and our aimto explore it, as the shuttle has done successfullyfor decades."

The central element of his design, the space shuttle itself, is bounded bypanels depicting the American flag and two sets of stars: 14 in memory ofthe astronauts lost aboard Challenger and Columbia, and five symbolizingthe shuttle fleet including Discovery, Atlantis and Endeavour.

The patch's jewel-shape is cradled by the outline of a bluecircle, symbolizing the orbiter's realm in low Earth orbit but alsoalluding "to the smoothness of the shuttle orbiting the earth,"according to the caption Dumesnil provided for the contest.

The words "30 Years" emblazoned at the insignia's center referencethe anniversary of the shuttle's first spaceflight, STS-1, in April 2011.

The contest, which closed to submissions last December, was conceived byspace shuttle program manager John Shannon and his technicalassistant Debbie Byerly as an "uplifting"activity for workers as the program entered its final year. Fourshuttle missions remain after the STS-130 mission of Endeavour, whichis currentlyin space. Should NASA's schedule hold, Discovery will fly the shuttle'sfinal flight, STS-133, in September.

Together, they first chose 15 from the 85 design entries to participatein the employees' People's Choice poll. Though they could have chosendifferently, they agreed with the workers' favorite and named Dumesnil thewinner.

Shannon will recognize Dumesnil together with Franzo and Gagnon at theSTS-130 crew's post-flight debrief in March to be held atSpace Center Houston, the visitor center for the Johnson SpaceCenter.

Digital copies of all 85 contest entries written to a CD will fly onboardSTS-132, the final flight of shuttle Atlantis.