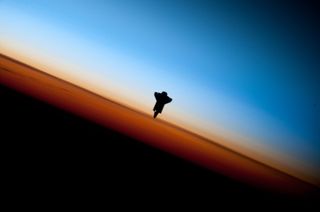 In a very unique setting over Earth's colorful horizon, the silhouette of the space shuttle Endeavour is featured in this image photographed by an Expedition 22 crewmember prior to STS-130 rendezvous and docking operations with the International Space Station. Docking occurred at 12:06 p.m. (EST) on Feb. 10, 2010.
(Image: © NASA)

Stunning new photographs released by NASA reveal the space shuttle Endeavour in silhouette against a colorful backdrop provided by the Earth.

The unique shuttle photos were taken by astronauts aboard the International Space Station just before Endeavour docked at the orbiting laboratory early Wednesday. NASA also announced today that it has officially extended the shuttle's mission one day, making Endeavour's flight a 14-day mission.

Normally a gleaming white spacecraft with a cargo large enough to fit a bus, the shuttle appears in shadow — the crisp outlines of its wings, nose and engines crystal clear against the Earth's horizon.

Endeavour appears to hover in a sky bathed in red, orange, white and blue light on the very edge of the Earth's atmosphere — the limb — as seen from the space station. In the past, photographers have also got views of a space shuttle crossing the sun.

Astronauts aboard Endeavour also got an eyeful as they drew close to the space station.

But to see it for real, especially as we approached in our rendezvous it is just beyond description. It's just so sharp. Very high-def.

The shuttle launched toward the space station early Monday on a mission to deliver a new room, called Tranquility, and window-lined observation deck to the orbiting lab.

Endeavour and station astronauts opened the new room late Friday and plan to spend the next week outfitting it for use. Next week, the joint crew plan to move the seven-window observation deck from the end of the new module to an Earth-facing berth on its belly.

The observation deck includes a round central window that is the largest space window ever launched. The new windows promise to give astronauts an unprecedented panoramic view of Earth and space.

The astronauts have encountered one glitch. An insulating cover meant for the end of Tranquility's outboard end doesn't fit. NASA engineers are studying the issue to decide how it will impact work to move the observation deck to its final location.

The observation deck should also allow astronauts to capture more images like those taken of Endeavour. With its panoramic vista, it will allow astronauts to observe incoming and departing spacecraft, as well see with their own eyes objects they move outside the station using the outpost's robotic arm.

Endeavour's crew is currently preparing for the second of three spacewalks to fully activate theTranquility module and its observation deck, though. That spacewalk is slated to begin late Saturday and last 6 1/2 hours.

With the one-day extension, the shuttle astronauts now plan to spend nine days at the space station before undocking and returning home on Feb. 21.

The extra day will allow them time to move the space station's urine and water recycling equipment into the new Tranquility room.

The mission is the first of NASA's five final shuttle flights before the orbiter fleet is retired later this fall.