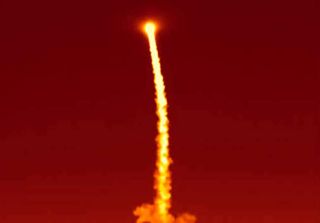 An infrared image of the launch of NASA's Wide-field Infrared Survey Explorer, or WISE, on Dec. 14, 2009 from Vandenberg Air Force Base, Calif. Image
(Image: © NASA/JPL-Caltech)

Mission managers arepreparing to pop the lid off a space telescope that will provide them with a glimpseof strange objects that lie in the distant cosmos.

NASA's Wide-field InfraredSurvey Explorer (WISE) will undergo a one-month checkout before beginning adetailed survey of the entire sky in infrared light. Once activated,researchers will be able to catalog hundreds of millions of objects including darkasteroids, failed stars and luminous galaxies.

The spacetelescope had acquired the sun's position and lined up with its solarpanels facing the sun shortly after reachingits polar orbit around Earth on Dec. 14. All spacecraft systems, includingboth the low- and high-rate data links, are confirmed to be working properlyand the instrument's detectors have been turned on, NASA said in a statementthis week. Scientists will continue to check out the spacecraft'spointing-control system until Dec. 29 ? the day the instrument's cover isscheduled to come off.

The cover protects theinstrument by preventing light from reaching the detectors and shielding theheat-sensitive interior of the telescope from heat that may come from anyaccidental pointing at Earth or the sun during launch.

Once everything checks out,engineers will send a signal to fire pyrotechnic devices to release nuts thatare clamping the cover shut. Three springs will then push the lid away and intoan orbit closer to Earth than that of the spacecraft.

WISE's first images will bereleased within a month after its one-month checkout.